Words of love ~ ~ ~, the reason? Rasmus Faber’s musical arrangements were comfortable and nice. Haruka Chisuga as the voice of Sylvia Lyyneheym may also be an added value. When listened the music with headsets, the music will definitely feel better. (M Hafizh A)

When the song was aired in Macross Delta, I was really sure that “there’s no song better than this for a death flag song”. I was right. This is the epitome of a death flag song. Lt. Messer’s feeling for Kaname Madoka was conveyed in a great way it’s so good that even though you know Lt. Messer going to die after this song, you still listen to it. (Naufal)

I chose this as the insert song of my choice because it raises up the spirit and make you feel more exited for the battle. Strong vocals accompanied with harmonious melody and integrating classical instruments to a modern pop song is one of the reasons that made me choose this song. (Eri G S)

Sangatsu no Phantasia – Hajimari no Sokudou

This ending theme of Kiznaiver anime series sung by a group which just started their debut on anisong. Hajimari no Sokudou presented the vocal and melody with sad atmosphere which suit with the theme of the anime itself. The melodic part in this song also played beautifully. In the anime ending theme sequence when this song played also presented the girls from Kiznaiver who hold flower bouquet with each other hidden message from the flower language which built the emotional atmosphere. (Rafly N)

Savage Garden – I want you

As we know, David Production loved to use western musician as JoJo’s theme song whenever possible, and it works like a charm. With Savage Garden’s I Want You as the ED Song of JoJo part 4, I really recommend this song as a “change of pace” in 2016’s Spring Anisong lineup. (Naufal)

Ninelie’s calm and soothing tone brings an end to the episode with a slow and upbeat ballad for the upcoming episodes. Also with vocals that are not overpowered and a beautiful piano arrangement by Hiroyuki Sawano makes for a beautiful combination for a great ending theme for Kabaneri of the Iron Fortress. (Eri G S)

This one song is interesting, soundtrack from interesting anime, sung greatly. The music itself is relaxing and nice to play. (Bagus D)

Rune ga Pikatto Hikattara come by combining elements that are commonly found in J-Pop song with a few funk and RnB element. At first glance, this song sounds like, or rather inspired by one of Earth, Wind, and Fire’s song, September. However, by combining various elements written previously, added with Freyja Wion (voiced by Minori Suzuki) vocal which as sweet as galaxy apple from Windermere planet, the song managed to perform with its own colour. With it’s upbeat rhythm, Rune ga Pikatto Hikattara can be pick for readers who is looking for moodbooster song in the afternoon. (Tanto D)

A departure from previous rock and fast-beat songs, this time MYTH & ROID chose to compose something deep, if not a bit trance. The light and beautiful tone of this song make the listener want to join in singing and know the meaning of this song that seems very deep. I recommend to listen this song before sleep. (Johan S) 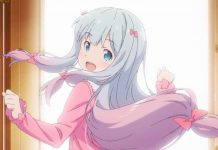