On Friday (26/8), Anime Festival Asia Indonesia 2016 (AFAID 2016) once again announced the list of guest stars through their Facebook account. It was informed that two seiyuu from High School Fleet anime series, Atsumi Tanezaki and Nozomi Furaki, along with the series creator, Takaaki Suzuki, will make their appearance in Jakarta.

High School Fleet tells the story of the journey of Harekaze warship crew from Yokosuka Marine High School. Just like the phrase “a smooth sea never made a skillful sailor”, Harekaze’s journey, commanded by Akeno “Mike” Misaki, is not as easy as everyone thought. This series will become one of the “Featured Anime” that will be presented on the main stage of AFAID 2016. The other titles are Kabaneri of The Iron Fortress, Kuromukuro, and Qualidea Code. Each of those anime series will present one of their seiyuu onstage.

Anime Festival Asia is a Japanese pop culture festival presented by Sozo. This year, AFA will be held in several countries, which are Singapore, Thailand, and Indonesia. In Indonesia, the event will be held on September 16-18th 2016 at JI Expo, Kemayoran, Central Jakarta. This will be the 5th AFAID since 2012. 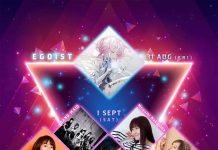