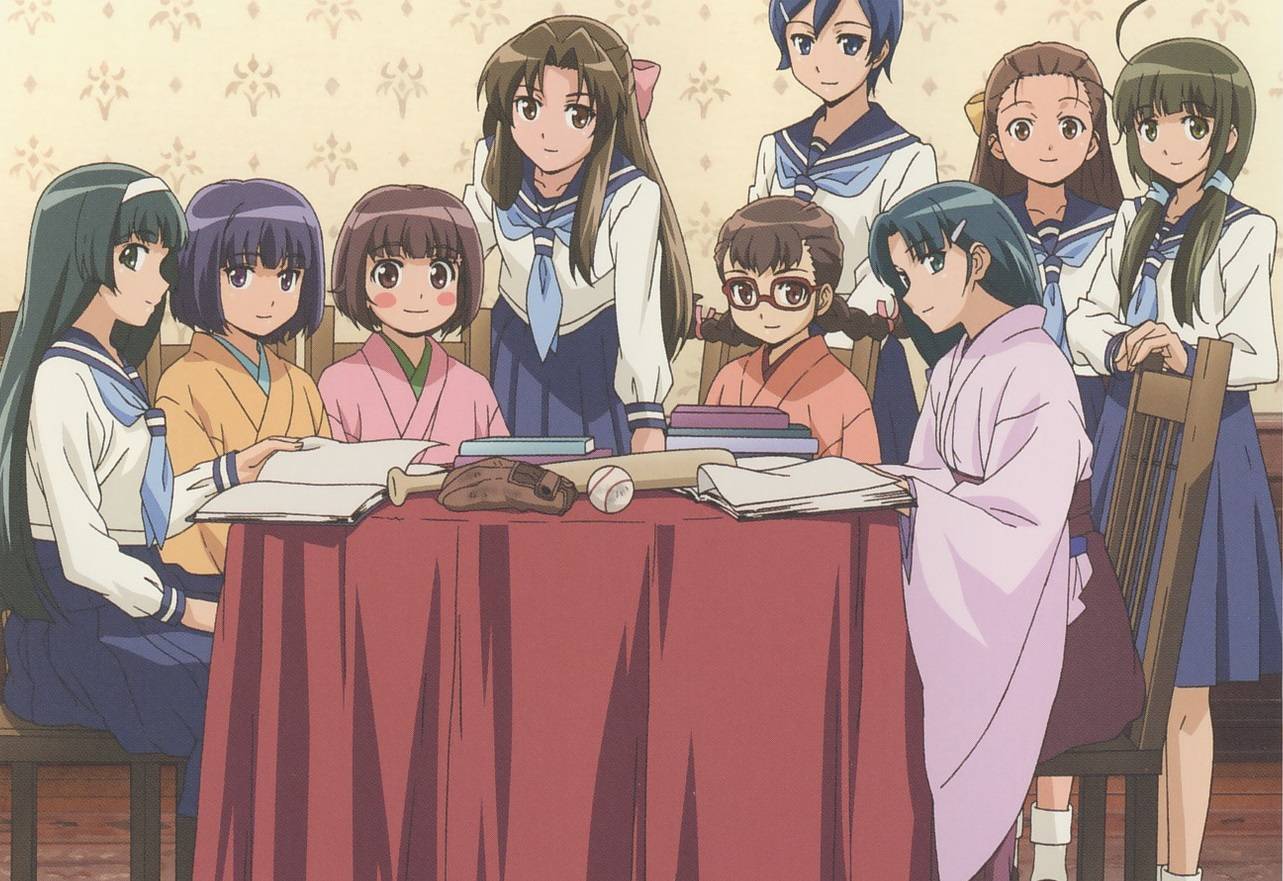 Taisho Baseball Girls (Taishō Yakyū Musume) is an animated series adapted from light novels by Atsushi Kagurazaka and illustrated by Sadaji Koike. The 12 episodes series was produced by J.C.Staff with Takashi Ikehata (Daphne in Brilliant Blue, Genshiken) as the director, and originally aired in summer 2009. It is quite unique for setting the story in Taisho era Japan (1912-1926), which is rarely depicted in popular media like this. While the story is fictitious, the use of that specific historical setting allows for a compelling tale that addresses issues of gender relations through a sport.

Covered in Sweat and Dust: Building Passion and Respect through Sports

Japan, 1925. Males over the age of 24 are about to receive the right to vote; women have been allowed to join political associations; a strange new type of school uniform called the “sailor suit” is being introduced.

It is amidst those social, cultural and political changes that this story takes place. The story began when Akiko Ogasawara was offended by a boy’s comment that women should “stay in the kitchen” and don’t need to study at school. To teach him a lesson, Akiko decided to beat the boy on his own game, baseball; which was considered as exclusively boy’s game at the time. Together with her best friend, Koume, the two of them gathered fellow students of Toho Seika girls’ school to form a baseball team and challenge the boy’s school team. It is not an easy goal to accomplish, as the girls encounter various difficulties ranging from getting approval to form the team, to having to practice baseball and improve their skills from scratch (very few of them have ever played baseball).

“It is not about winning or losing. It’s about being able to play the game.”

The above passage summarizes the spirit that drives this story, both in regards to the sports theme and to the issue of gender relations that it addresses. Regarding the sports theme, this show is one of the more realistic and down-to-earth kind. There are no physics-defying techniques, or over-the-top expressions. We just have some girls, learning and practicing baseball from nothing, covered in sweat and dust, and occasionally using some unusual methods. Ultimately, winning or losing does not matter too much. The more important things are all the efforts they had gone through to improve their skills, enjoying all those efforts, and enjoy the game.

Regarding the gender relations issue, I think the story managed to cover it well. The males are not necessarily being portrayed as bad. Indeed, it seems that the males themselves are also constrained by rigid, traditional values. And the girls are not portrayed as hating males either. Koume, for example has a good relationship with the boy who worked in her father’s restaurant; and that boy is supportive towards Koume. What the girls oppose, after all, are not the males; but rather, the underestimating view towards the girls. And as such, what matters more than winning or losing is for the girls to be acknowledged and respected as serious, equal opponent on the field; rather than treated as mere naive fools who mistakenly think they can play baseball against boys. Obtaining that respect is the greater victory to aim. I think it’s also interesting to look at the cultural transformation that is being depicted. On one hand, the desire for modernization had made the society adopted Western culture. Yet, on the other hand, people are still adhering to traditional values that sometimes are contradictory with the new values. From there, I am able to get the feeling of a nation that is seeking to define its new identity.

My favorite character in this story is the team strategist, Noe Kawashima. While lacking in physical skills compared to other team members, she is smart and is very dedicated to her role with much confidence. She analyzed the strength and weaknesses of the team members, analyzed how opponent team plays, and determines how the team should play. The team can improve largely because of Noe’s role to tell the members what they need to improve. That’s how awesome she is!

She does have a flaw; her calculative method can come off as too strict and restrictive towards her friends. For example, she forbade fourth batter Tomoe from trying to hit a home run because she’s better at hitting regular base hits; no matter how much Tomoe desired to hit a home run. Regardless, her contribution is crucial in developing the team into being able to stand up against a team that’s been aiming for national championship.

To sum it up, this is an excellent anime with positive themes and endearing characters. If you want to watch a realistic sports anime; featuring cute girls as the main characters, Taisho Baseball Girls is definitely worth watching.

As I have mentioned above, the anime also portrayed the effect of modernization and development on identity and culture. The eighth chapter of Cynthia Weber’s International Relations Theory: a Critical Introduction (2nd edition onward) discusses this issue and its implication on stability. The chapter provides a critical reading of Samuel Huntington’s “clash of civilizations” thesis, by pairing it with the movie East is East. Weber demonstrates that identity itself contains contention and contradiction. The desire to be an identity is as prone to cause conflict as with differences between identities. Because when the identity of a group is attempted to be strictly defined, people who belong to that group but deemed not fully conforming to the strictly defined values, might suffer from discrimination and oppression.