In the second session, the next speaker was Clarissa Punipun who was famous as a cosplayer. This session is more relaxing and fun as Punipun shared myriad stories about her experiences, starting from the beginning to the point of becoming a maid in Moe Moe Kyun Café, which made her more famous and known to many people.

She mentioned that she first knew about cosplay through an anime magazine called Animonster, which, in one of its columns, discussed about a cosplayer group named The Endless Illusion. From that point, she began to have interest in cosplay.

Punipun did her first cosplay in 2006, in an event called Hilton Matsuri. At that time, she cosplayed as a character from the anime series Gunslinger Girl with one of her friends. She mentioned that the cosplay she did was still far from perfect and wasn’t actually satisfying.

Despite that, she still felt happy to walk in a Japanese-themed event. Moreover, there were a lot of Japanese food stalls which were hard to find in other places at that time. She also felt really joyful when she met someone who was also cosplaying the same character as her.

Next, Punipun’s second cosplay was a character from Death Note named Misa. Since that moment, Punipun started to focus on cosplay while also increasing her skill to be better in playing as a character. Punipun also said that she really likes to create many types of properties for the cosplay character. She often does trials or experiments in making properties so that she can find many new ways in creating one.

One of the moments which made Punipun more famous and known to Japanese culture fans in Indonesia was the time she was chosen to be a maid in Moe Moe Kyun Café which was held in the event AFAID 2012. Punipun explained the process from selection to photography and training session in Singapore. To her, there were many interesting and unforgettable experiences from it.

Since that point, she’s often invited to be a guest star in several Japan-themed events in Indonesia.

Sweta Kartika and Clarissa Punipun are just a few of many people who has successfully stand upon their dreamed passion and goal. They have become creators and play important roles in the development of Indonesian creative industry. However, their journey to reach what they have become today were not easy and not achieved in a short time. They had to go through many struggles and even took some sacrifices to reach their positions now. 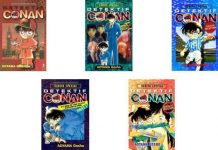