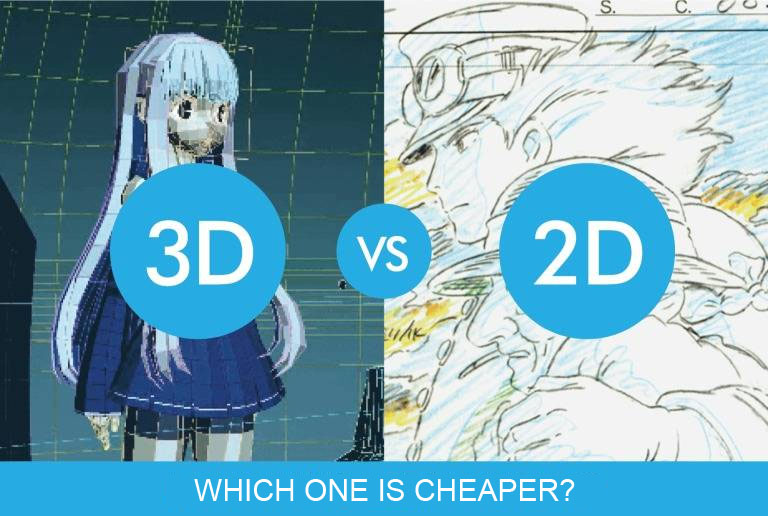 This article is a continuation from part 3.

“Nowadays 3D CG is used a lot for mecha and vehicle animation in anime. It must be because 3D CG is much cheaper.”

That is another widely spread assumption, especially regarding the use of CG in anime. Thankfully, CG animator Takuya Minezawa from Toei had explained this matter extensively in his tweets: http://yaraon.blog109.fc2.com/blog-entry-23912.html. Takuya mentioned that unlike commonly assumed by many people, 3D CG is neither easier nor cheaper than traditional animation. Why then, 3D CG remain used in anime? The main factors that make 3D CG remains a necessity in an anime production are usually the lack of highly skilled 2D animators and time constraints.

As it has been explained in a previous part, the number of skilled animators is outweighed by the amount of anime produced in each season. It becomes even more problematic when the anime requires specific objects or scenes that need the talent of specialized or veteran animators, such as: mecha, fighting scenes, camera panning, background animation, or group dance which are notably difficult to do. And the animators who are capable enough to work on such objects/scenes would certainly have a stuffed schedule.

With the anime needs to be finished in a specified time, studios that could not procure 2D animators capable enough to work on those scenes would face two options: to push forward with any available animators no matter their skill level, or to use 3D CG. Of course, 3D CG is a more reliable option, as there are quite a plenty of 3D CG animators to make it easier to agre in a schedule with the 3D animator or studio; and, although 3D CG is not easier to produce, 3D CG objects/models which had been creatred can be reused over and over again, making it possible to produce sufficient amount of models relatively quickly .

And how about full 3DCG anime such as Arpeggio dan Sidonia? Those anime are special cases as they were made by Sanzigen and Polygon Pictures,* two studios that actually specialize in 3D animations and employ animators who are trained to work with 3D software only. Thus, those anime does not use 2D animation not because of a choice to reduce cost, but because their animators are not 2D animators by training to begin with.

Difficulties and Problems in Applying  3DCG Animation in Anime

3DCG animations in anime are, unfortunately, quite often looked weird or uncanny. The cause of these problems is the difficulty of applying 3D CG animation in limited animation. Mitsuo Iso had mentioned this problem in an interview regarding the 15th episode of RahXephon:

“Coming as I do from a background in traditional animation, I find that it is much easier to manipulate the parameters of the frame in 2D. To me, what makes animation come alive is interesting movement and effective use of the frame, yet I find that these are aspects that have proven difficult to handle sufficiently well in 3D.”

The difficulty of manipulating those frame parameters and the characteristics of 3D CG itself are, unfortunately, restraints that limit 3D CG animators in developing idiosyncratic animation styles.

Sanzigen had attempted to apply limited animation techniques for 3DCG anime in Aoki Hagane no Arpeggio (Arpeggio of Blue Steel). But it seems that the 3DCG animators who are not used to limited animation experienced difficulties in incorporating movement, timing, dan sense of weight which resulted in less than satisfactory outcome.

To overcome such problems, it is necessary for 3DCG animators to work with 2D animators who have been used to the timing of limited animation. A good example of such combination can be seen in the TV series of Black Rock Shooter, where Hiroyuki Imaishi (animator & director of Gurren Lagann) acted as 3DCG battle director and applied his own sense of timingnya to the 3DCG sequences of BRS.

Other than BRS, one of the videos in the Animator Expo titled Casette Girl  is another good example of combination between 3DCG animators with an experienced 2D animator, Shigeto Koyama. The video incorporated elements that often appear in 2D animation such as impact frames.

To be continued in part 5.

*Correction: In the original version of this article, initially it was written that Sidonia was produced by Sanzigen rather than by Polygon Pictures as it should be. Thanks to Adit for the correction.