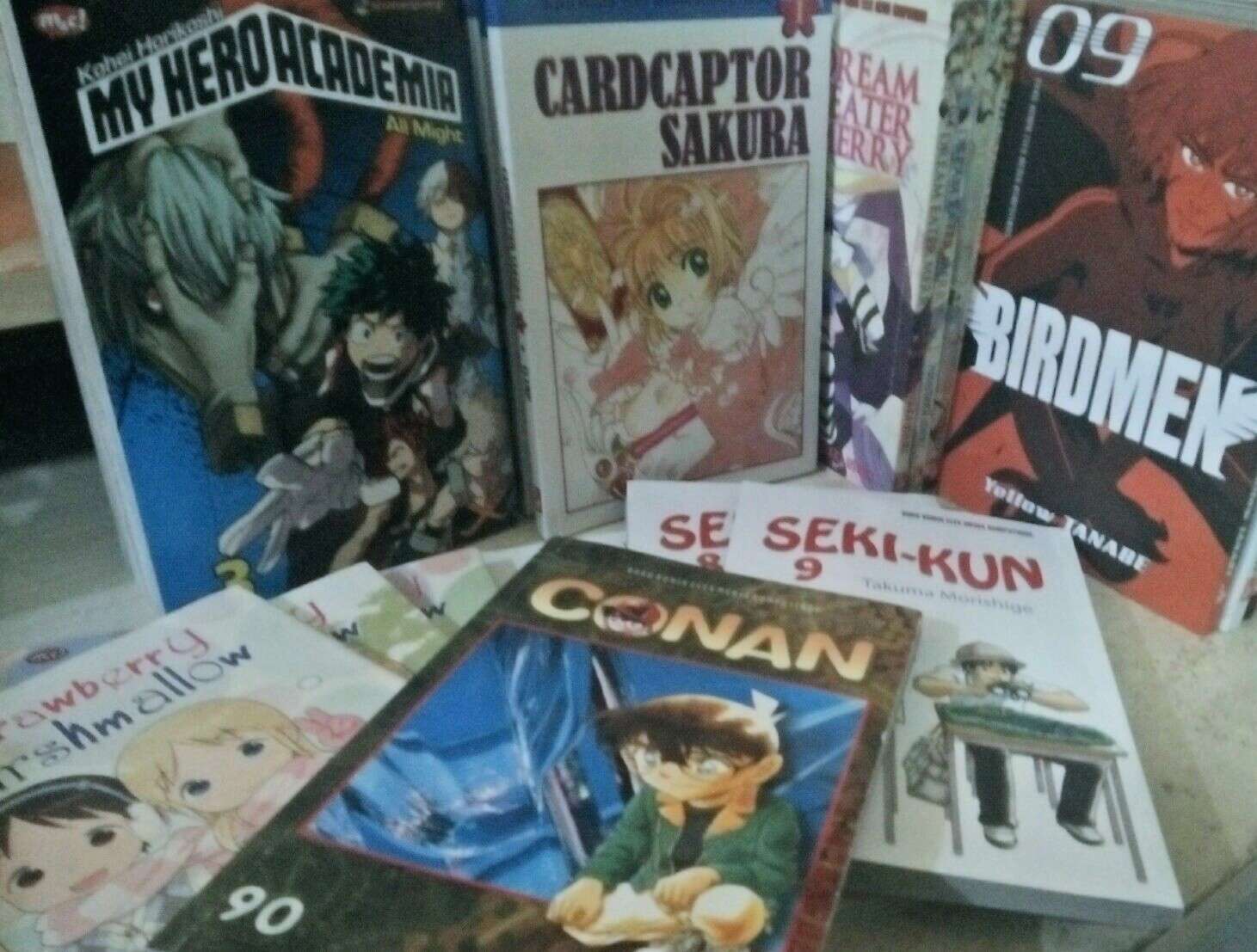 In Indonesia, manga is an aspect of Japanese popular culture that are most accessible legally. Every week, there can be a dozen of manga titles, whether it’s a newly launched series or has been ongoing for some time, released by publishers in Indonesia. To provide a better picture of the consumption of legally published manga in Indonesia, KAORI Nusantara conducted a survey on the subject for our Indonesian readers. The survey was conducted from 6 February to 12 March 2018, and was taken by 218 respondents. 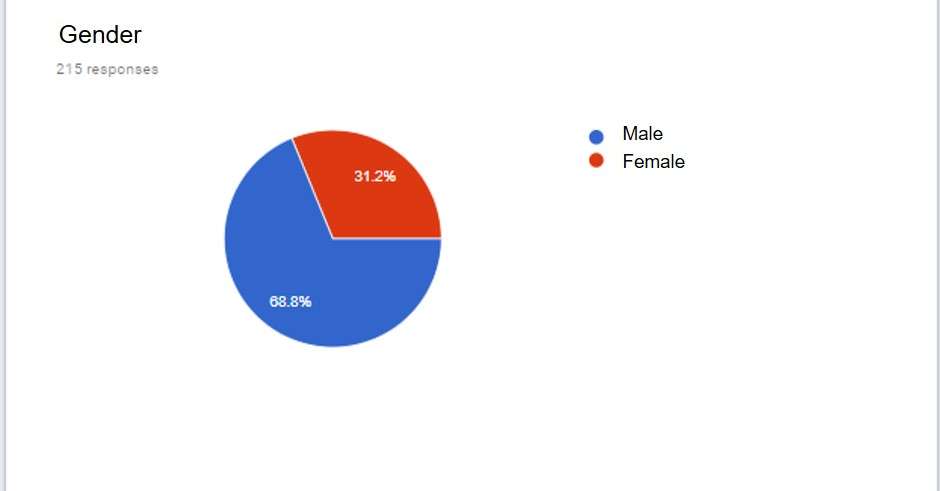 More than three quarters of the respondents (78%) said that they only buy manga when there is the latest volume of the series that they like. Thus, the number of manga purchased per month will vary depending on the availability of of new volumes from the series that each individual buyers like. Regarding the series preferred by buyers will be discussed later in the next part. 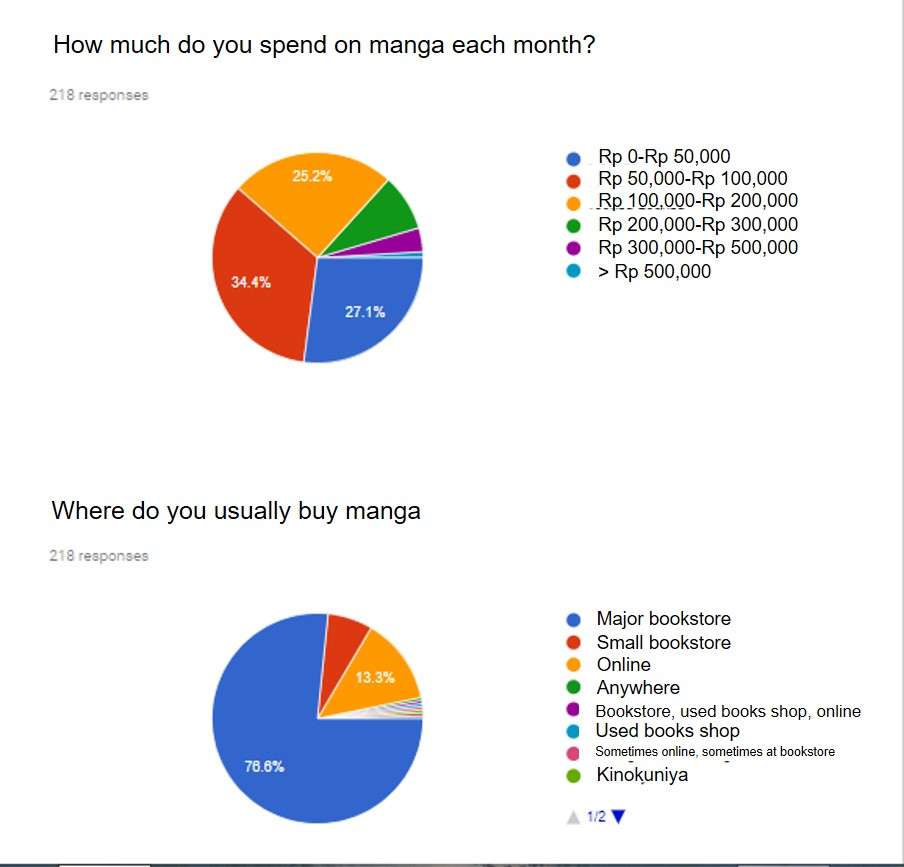 Those numbers strengthen the previous findings regarding the purchasing frequency of the respondents. This is due to the small difference between the number of respondents for the lowest budget and middle-ranged budget, although the budget can be also depend on the financial capabilities of each buyers, so their budget may vary. If we consider the average price of a regular manga volume is Rp 25,000.00 (US$ 1.81), the number of manga books being purchased by the majority of respondents ranges between 1-8 books per month, with most of those purchasing about 2-4 books per month.

On the preferred location to purchase manga, the majority (77% of respondents) answered that they buy manga at major bookstore chains. Bookstore chains such as Gramedia and Toko Gunung Agung (also other chains) are still the main source to get new manga. What is more unexpected is that buying online occupies the second place with 13%, though we don’t get detailed information on what online shopping sites are used to purchase manga, whether they are the online shopping service of major bookstore chain or online trading platforms. 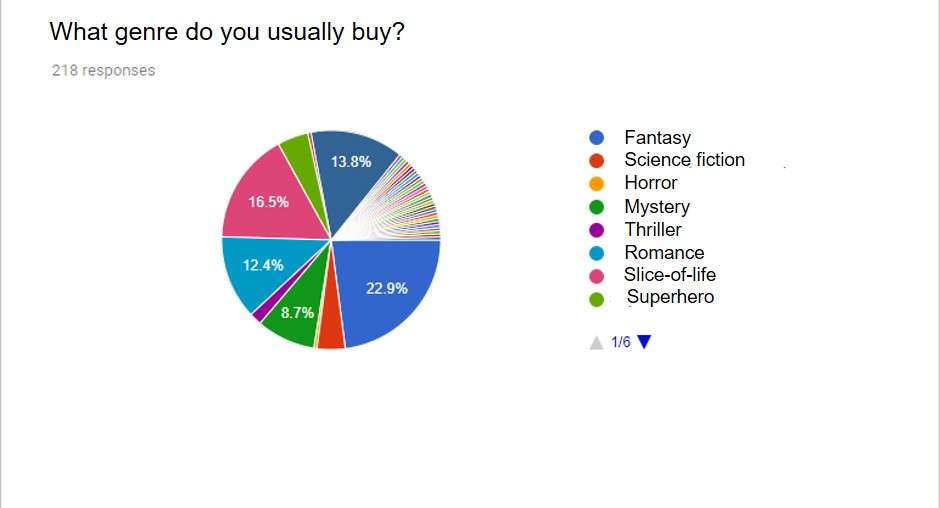 The respondents’ preferred genre mostly focus on fantasy, slice-of-life, romance, comedy, mystery, and action. Looking at the large proportion of respondents choosing fantasy,  we can see that there is a high interest for comics with fighting scenes (which are usually featured heavily in fantasy stories like Fullmetal Alchemist). Also, from the popularity of slice-of-life, romance, and comedy, then we can also assume that love stories or even romantic comedies are preferred by the market at large. The market for superhero, sport, and sci-gi genres are niche market based on the survey. 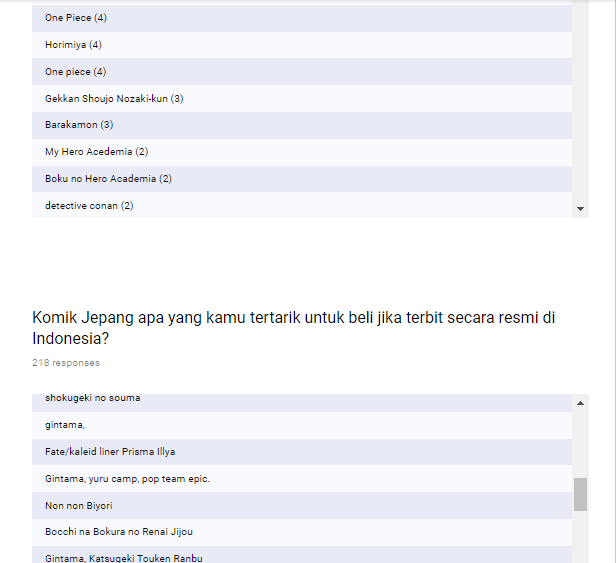 For the manga that the respondents read regularly, two long-running titles, Detective Conan and One Piece, appear the most in the respondents’ answers. Then, there is My Hero Academia which has only been recently began to be published in Indonesia. The popularity of My Hero Academia manga may be influenced by the popularity of the anime. Other series mentioned by the respondents can also be said to have been popularized by anime adaptations, such as Gekkan Shoujo Nozaki-kun, Nisekoi, and Attack on Titan. Aside from those titles, there are also series that have not been adapted into anime yet, but have their own strong fanbase (such as I am Hero and Captain Alice), and there are even manga that has been published in Indonesia first before the anime adaptation was aired (such as Altair). 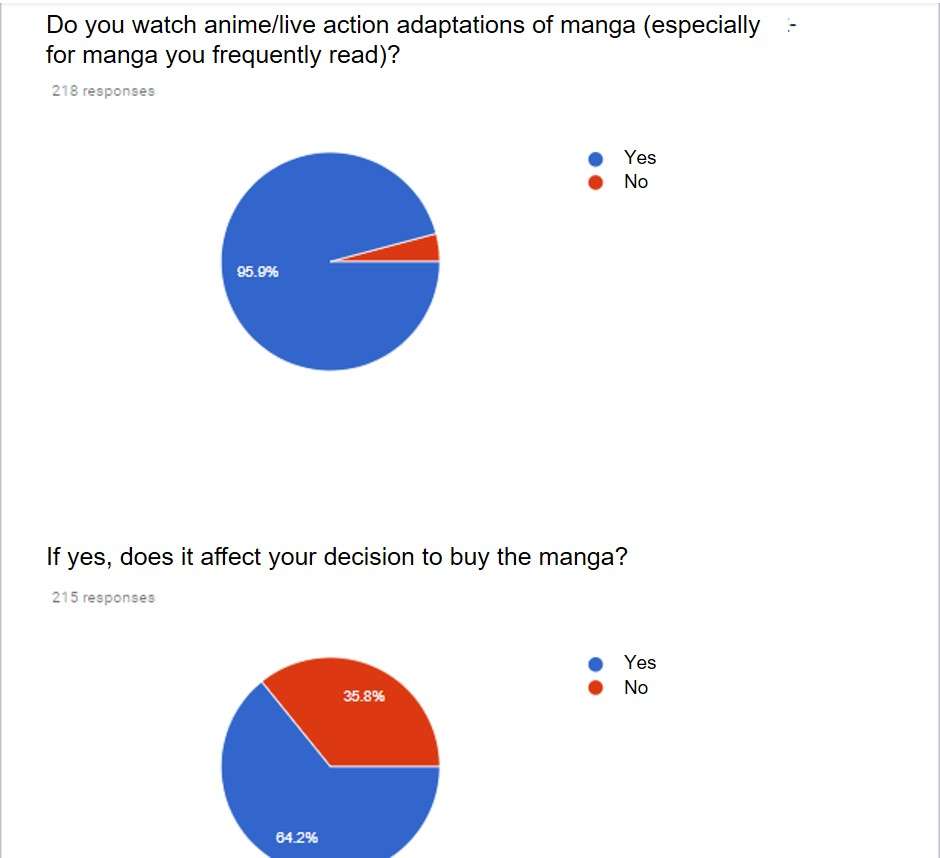 Almost all of the respondents (96%) said that they have also watched the anime adaptation of manga, especially the ones that they read regularly. From that number, 138 respondents said that watching the anime does affect their decision to buy the manga that has been published in Indonesia, while 77 respondents said that it does not affect their decision. When we consider the previous part, we can see the pattern where the airing and popularity of anime adaptation, and even other forms of adaptations, do give some extra boost to the purchase of the manga series. This situation can be seen with My Hero Academia, which has attracted general interest (appealing to both male and female readers and not limited by genre preferences). With Nozaki or Is the Order a Rabbit?, the effect also happens, but limited mainly to the targeted demographic of the respective manga.

The influence of anime adaptation can also be seen from the respondents’ suggestions of what manga series they want to see published in Indonesia. Series that have a lot of fans through adaptations are Gintama and Shokugeki no Souma. Other titles mentioned by respondents that have also been adapted but haven’t been released in Indonesia include Miss Kobayashi’s Dragon Maid, Bungou Stray Dogs, etc.

Influence of Review and Hype

Based on the survey, almost half (45.9%) of the respondents are not affected by review or hype in deciding to buy a manga series. Between review and hype, though, review has more influence than hype with 23.9% of respondents say review influenced their decision to buy manga, and 26.6% cite being influenced by both, while only 3.6% say they are influenced by hype only. 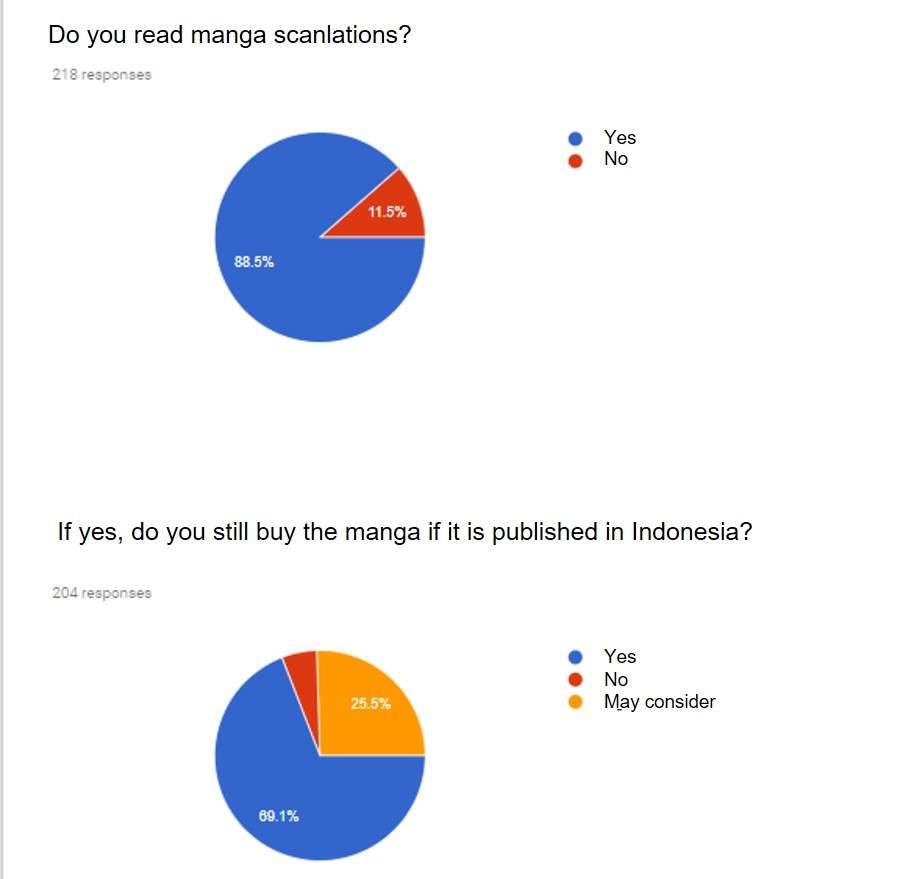 The majority of the respondents (88.5%) also read manga through scanlation from the internet. With the accessibility the internet offers, availability of Indonesian language scanlations, and also the proficiency of the readers to read in other languages, then it is not very surprising. More so if the series on scanlation are more up to date with the latest chapters or have been popular among internet users. We can see that reflected in the respondents’ suggestions of what manga series they want to see published in Indonesia. Some of them include Promised Neverland, We Can’t Study, Tomo-chan wa Onnanoko, and other series that have not been adapted into anime, but has drawn readers’ interests from scanlation.

Interestingly, scanlation is not making the readers leave locally-published licensed manga. Almost 70% of respondents said that they will buy the manga they read from scanlation if the manga are published by Indonesian publisher, while 25% said that they will consider buying. The reasons given by the respondents for buying the manga they have read from scanlation usually involves wanting to appreciate the work of the manga artists, and also to contribute to the continuation of the series. Aside from those, many also said that the they want to have the manga for their personal collection. Some unique answers include wanting local publishers to keep publishing manga in Indonesia, preferring to read physical book, and to read the bonus chapter included in the tankoubon version.

To conclude, from the findings of our survey, we consider the interest to buy legally licensed manga in Indonesia, particularly for physical copy, is still high. There are some added values that fans associate with owning legal physical manga. Readers even still largely make their manga purchase at physical bookstores. Our findings also reveal that adaptations still play a large role in increasing readers’ awareness of manga that they may consider interesting.

This survey only provides a picture of licensed manga in in Indonesia from the consumers’ perspective, particularly for physical manga. We will explore perspectives from publishers and information on digital manga at later times. 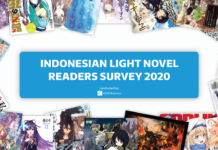 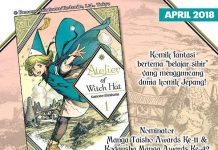 Planetes Manga to be Re-released in January