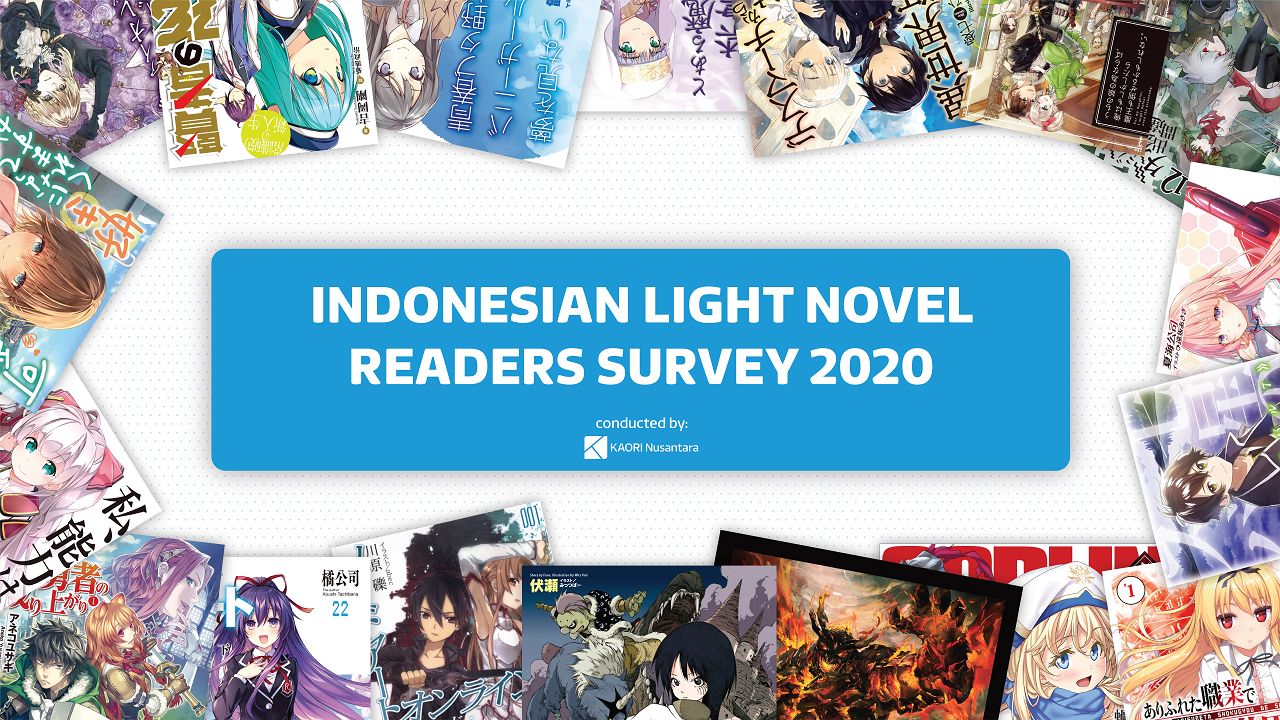 As discussed in a separate article, light novels have become a significant source of anime adaptations. Some of those adaptations are popular enough among Indonesian fans that Sword Art Online has even been said to have become a gateway series to many anime fans who were teens or young adults when it aired. But on the other hand, up to 2021 only a few of the source materials have been licensed to be published in the Indonesian language. Even Sword Art Online is only getting an Indonesian edition from a major publisher in 2021, nine years after the anime debuted. Furthermore, some smaller publishers like Shining Rose Media and Katalis Pustaka have ceased operating after attempting to bring some light novels around the mid-2010s.

Considering those situations, KAORI sought to investigate how much interest anime fans in Indonesia have to read light novels. We conducted a brief survey on the subject conducted from 17 February 2020 to 27 February 2020 with a total of 150 participants. In addition to what titles they like to read, we also asked the respondents their means of reading and purchasing light novels.

Given its popularity, it’s not surprising to see Sword Art Online being at the top of the list. However, whether these readers will still buy the Indonesian edition to be released by m&c! remains to be seen. Another interesting title popular among the respondents is Tensei Shitara Slime Datta ken. Its manga version has been published in Indonesia by Elex Media Komputindo with the title Regarding Reincarnated as Slime, while the anime also available to be seen in Indonesia through several legal streaming channels courtesy of Muse Asia. But, with these different media of the series already being available for access in Indonesia, would fans of the series remain interested in getting the novels if it were to be published by an Indonesian publisher? 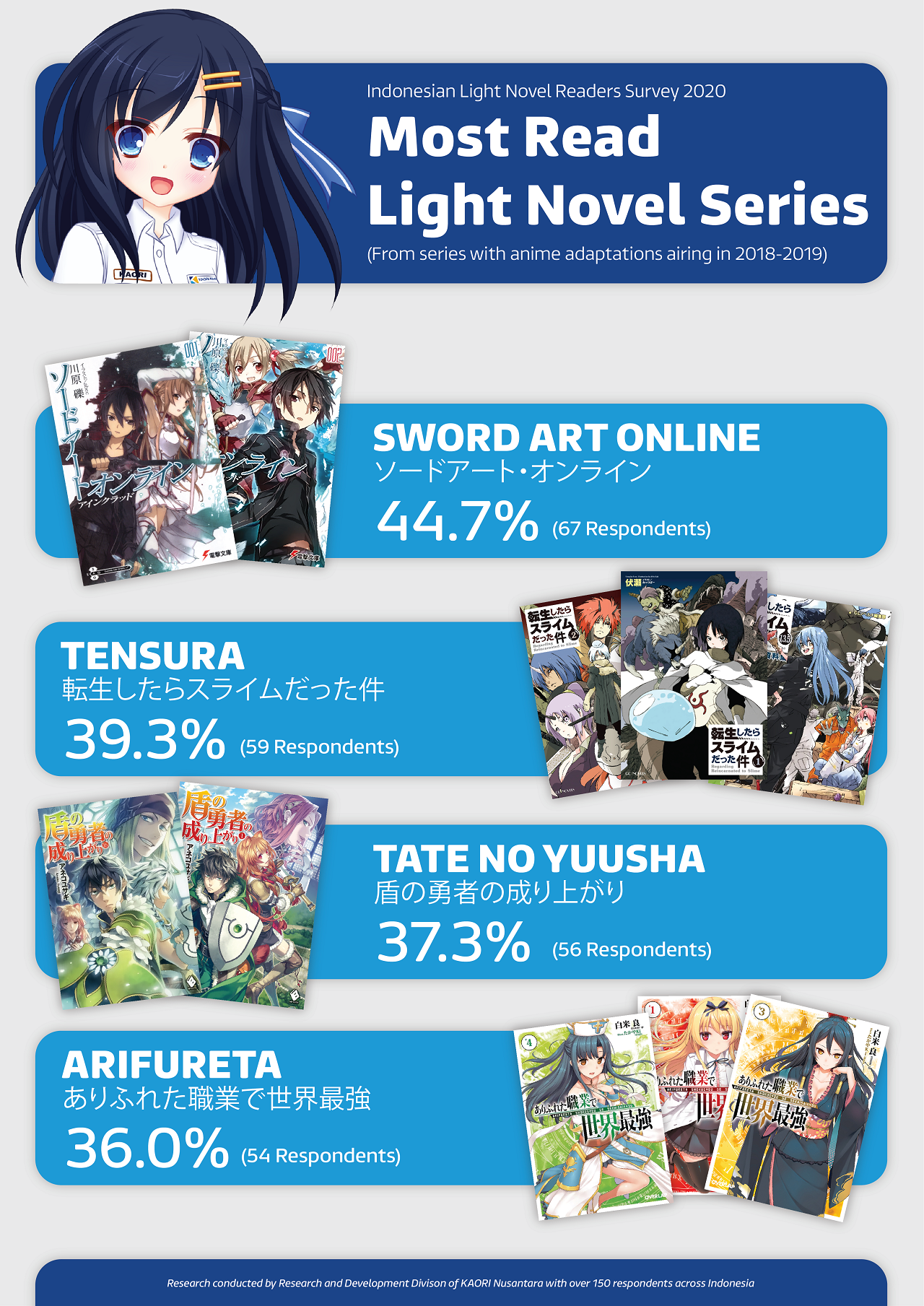 Next, we question the respondents what other light novels they have read outside of the above list. From the specific titles mentioned in the answers, these were the titles that appear the most often:

Notably, No Game No Life has been published in Indonesia by Shining Rose Media. Meanwhile, Oregairu has its manga version published in Indonesia after the time of this survey. But one of the more surprising titles most mentioned by the respondents was Otomege Sekai wa Mob ni Kibishii Sekai desu, as it appeared to be popular enough even though there hasn’t been any news of it getting anime adaptation soon (Infinite Dendrogram and Mushoku Tensei already got theirs in 2020 and 2021, respectively). And although it’s not a light novel series, six respondents answered with Hyouka, the novels of which has been published in Indonesia by Penerbit Haru.

In addition, some respondents mentioned they read the works of a specific writer such as Kazuma Kamachi (To aru Majutsu no Index, Heavy Object, Zashiki Warashi of Intellectual Village), or the novelizations of the works of Makoto Shinkai (some of which has been published in Indonesia by Katalis Pustaka or Penerbit Haru), or focusing on Fate series’ novels. Several respondents also include Chinese or Korean web novels like Solo Leveling in their answers. 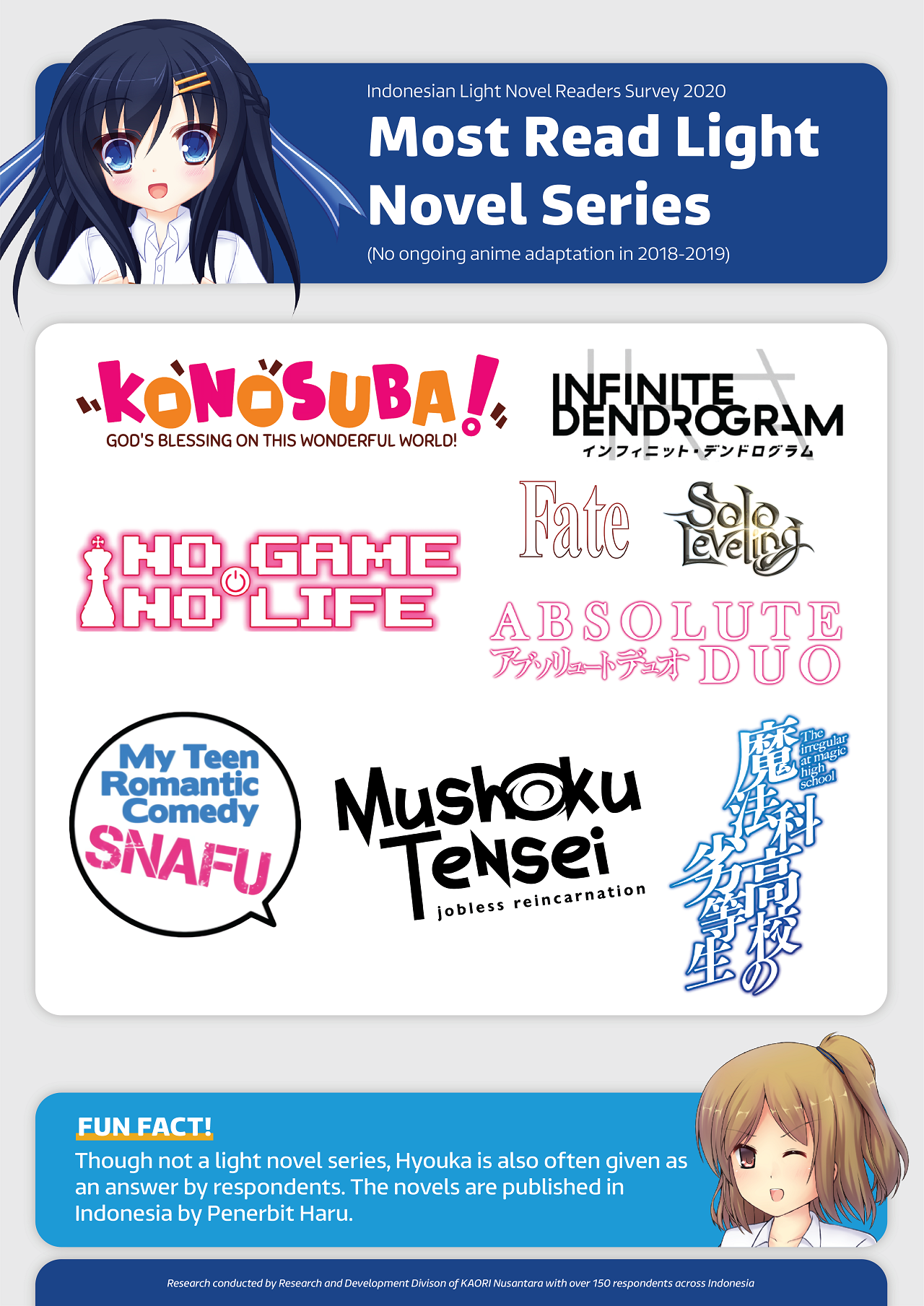