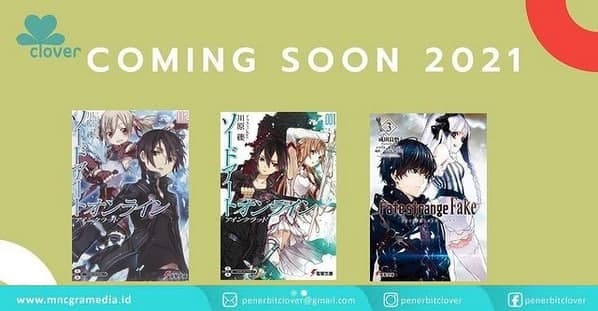 As previously reported, Reki Kawahara’s Sword Art Online light novel will be published in Indonesia by m&c! novel imprint, Penerbit Clover. On 1 May 2021, the  editors have revealed the tentative release window for the novel during a stream as part of the commemoration of m&c!’s 18th birthday. Barring any disruption, the first volume of the novel could be available in Indonesia in June or July of 2021.

Sword Art Online follows the story of Kazuto Kirigaya as he plays a virtual reality online game called Sword Art Online, using the character name Kirito. However, once he is logged in to the game, he and thousands of other players of the game can’t log out, and if their HP reaches zero or if their game device is removed forcibly, they would die in the real world. The only way to log out from the game is to finish the game by clearing all the floors of Aincrad, the game’s flying castle filled with monsters to fight.

The novel is written by Reki Kawahara while abec is in charge of illustration. The novel has been published since 2009 and has reached 25 volumes, and there are also side stories and spin-offs written by him or other writers. It also has been made into comics, anime series with three seasons, an anime film, and several video games.

“Re:Zero, A Week at the Mansion” Manga to be Released in Indonesia in May 2021