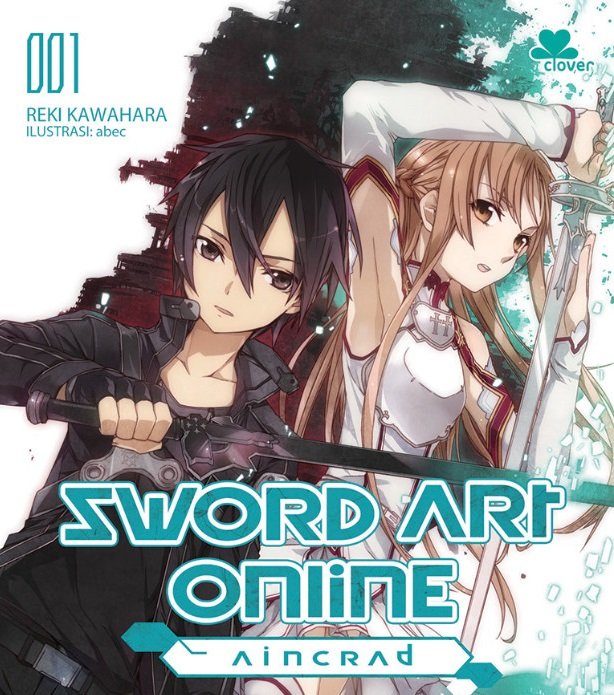 The novel-publishing imprint of m&c!, Penerbit Clover, has set pre-order date for Sword Art Online 001 AINCRAD novel. The pre-order is opened from 6 September to 14 September 2021 at Owl Bookstore and Gramedia’s official shops at Shopee Mall and Tokopedia e-commerce platforms. The book retails for IDR 98,000 (around USD 6.84), but a special price of IDR 83,300 (about US$ 5.84) is offered for the pre-order, with a mini notebook bonus included. The announcement does not mention the shipping date for the product.

The book will be printed on 13 x 19 cm book paper, with a page count of 352 pages including eight coloured pages, and will have glossy laminated soft cover. The book is given 17+ age rating.

The product description introduces the book as follows:

The light novel that anime fans have waited for a long time! Sword Art Online is a best-selling light novel in Japan that has ranked in the “Kono Light Novel ga Sugoi!” popularity ranking for many consecutive years it eventually gets barred from nomination to give chance for other titles.

“Sword Art Online (SAO)”—a new generation VRMMO game created by genius scientist Akihiko Kayaba—is a cruel game. Players would not be able to log out until the game is cleared, and getting a game over means the player would “die” in the real world.

Having logged in to SAO, Kirito quickly understands the system and accept the “reality” of the VRMMO that puts his life on the line. He choose to be a solo player in his journey to the highest floor of the flying castle Aincrad. However, his encounter with a girl named Asuna brings changes to the lonely “Black Swordsman”…

Will Kirito be able to escape this virtual world?

The novel is written by Reki Kawahara while abec is in charge of illustration. The novel has been published since 2009 and has reached 25 volumes at the time of this writing, and there are also side stories and spin-offs written by Kawahara or other writers. It has also been made into comics, an anime series with three seasons, an anime film, and several video games. The anime film Sword Art Online: Ordinal Scale was shown in Indonesian cinemas in 2017.

The release of Sword Art Online light novel in Indonesia was first announced in December 2020 when Clover included Sword Art Online along with Ryohgo Narita’s Fate/Strange Fake in the list of translated novels that will be published in 2021. The novel was planned to be released in June or July this year, but production was delayed by social restrictions put in place due to surging COVID-19 cases in Indonesia.