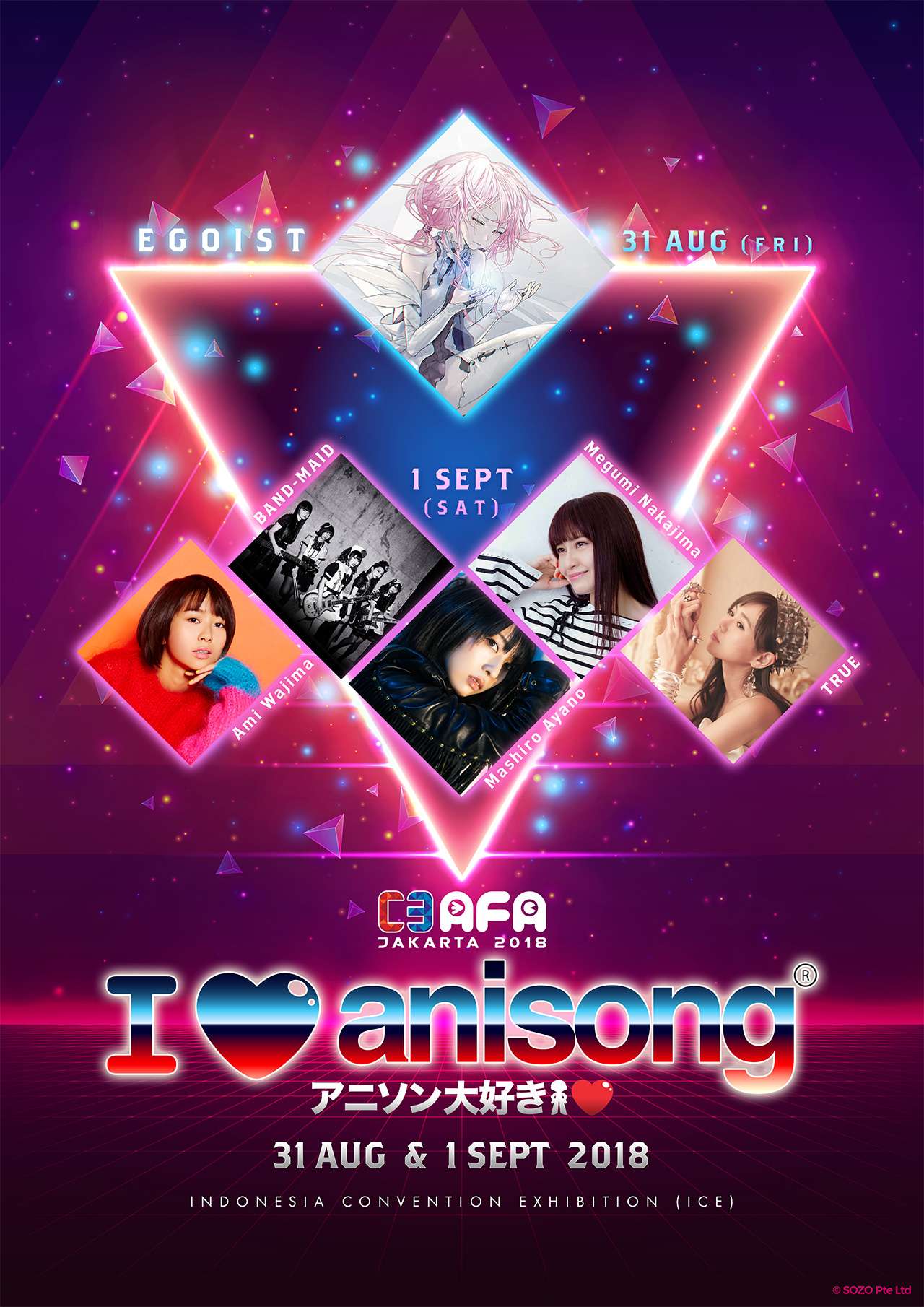 Jakarta, June 25th, 2018 – Anime Festival Asia Indonesia is back with new spirit and bigger venue, with performances from 6 JPOP Stars at I LOVE ANISONG Stage, C3AFA18 JAKARTA – following the great achievement from previous year, which successfully bring more than thousands of visitors. This year AFA will come to Indonesia for the seventh time in 2018 with the return of many Japanese Pop Stars and pop exhibition enhthusiasm with ambience of Akihabara & Harajuku only at AFA Venue which will be located in Indonesia Convention Exhibition, Jakarta!

Anime Festival Asia Indonesia 2018 (C3AFA18 JKT), will be held in Indonesia for 3 days – August 31st, Sept 1st & 2nd 2018 at ICE, Indonesia. C3AFAJKT, the biggest and most popular pop culture festivals in Asia has confirmed 6 Japanese acts who will be rocking the “I LOVE ANISONG” Stage which are:

AMI WAJIMA, BAND-MAID, EGOIST, MASHIRO AYANO, MEGUMI NAKAJIMA & TRUE to perform at I LOVE ANISONG Stage C3AFA18 JAKARTA. This will be the first time for other five artists to perform in Indonesia, except EGOIST who was performing at AFA Festival in 2014.

AMI WAJIMA
Ami has won the HORIPRO x PONY CANYON Audition in 2016 when she was just 9 years old. Her debut song was also chosen to be the opening song for the TV anime series: Mayoiga.
This rising anisong star has since went around the world such as China, the Philippines and Singapore to perform her hits.

BAND-MAID
Formed in 2013, the all-girl rock band with 5 members all dressed as French maids.
Band-maid’s concept is about creating contrast, such as how their cute appearance contrasts their rock music. Singer/guitarist, Miku Kobato was originally working as a real maid in a Japanese maid café.

EGOIST
Originally created as a fictional band to produce the theme music for the popular animation: Guilty Crown. The band’s success has allowed them to continue outside of Guilty Crown and they have produce songs for various animation series such as Psycho-Pass and Kabaneri of the Iron Fortress. The group is made up of Song/Music Composer, Ryo of supercell and Chelly, for the Vocalist. This band uses the persona called Inori, and no one has seen Chelly’s face, when performaing on stage, EGOIST using Motion Capture Technology & LED Screen systems to achieve a true-to-live concert experience. Their concert would be an absolute unique experience for EGOIST Fans and Non-Fans.

MASHIRO AYANO
Known for her clear voice, Mashiro Ayano made her debut in 2014 with “ideal white” which was also the opening theme song for the popular anime series: Fate/Stay Night. Since then she has continued to perform at various countries such as Singapore, Los Angeles, Germany and Taiwan.

MEGUMI NAKAJIMA
A talent singer and voice actress in Japan. After winning the top prize at “Victor Vocal & Voice Audition” in 2007, Megumi Nakajima made her voice acting debut with the hit TV animation: Macross Frontier. She played one of the iconic main characters, Ranka Lee. As the character, she performed many songs including “Seikan Hikou” which was No.5 on Japan’s Oricon single chart.

TRUE
Singer and lyricist, her third single, “Way to love” was the theme song for the Japanese drama, Love Revolution. As a lyricist, she has wrote songs for LoVendoЯ, Kis-My-Ft2, Eir Aoi and THE IDOLM@STER. TRUE would be celebrating her 5th anniversary in 2018.