Indonesian comics publisher m&c! has licensed Jun Mayuzuki‘s manga After the Rain (Koi wa Ameagari no you ni) with the first volume releasing on 26 June 2019. The manga is published under m&c!’s “Akasha” mature comics label with the price of Rp 40,000 (about US$ 2.8). A seven-page preview of the Indonesian edition was also posted to m&c!’s Facebook page.

here is the synopsis of the manga as described by m&c!:

Akira Tachibana, a pretty, athletic, and popular 17 years-old high school girl, falls in love with a 45 years-old man instead of with a hot guy of her age. The man is Masami Kondo, a manager of a family restaurant. What makes Akira fall in love with this cowardly and unkempt-looking man?

Jun Mayuzuki began serialization of the manga in Shogakukan’s Monthly Big Comic Spirits magazine in 2014, before moving to Weekly Big Comic Spirits in 2016. The series has ended in 2018 and has been collected into 10 tankoubon volumes. An anime adaptation directed by Ayumu Watanabe at WIT Studio aired in winter 2018 season on Fuji TV’s noitaminA block. A live action film by Akira Nagai and starring Nana Komatsu and Yo Koizumi was released in Japan in May 2018. 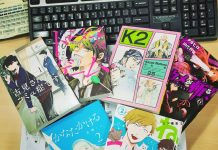