Encore Films has announced that the film Her Blue Sky Sora no Aosa wo Shiru Hito yo) will be screened in Indonesia. On Monday (7/10), Encore Films Indonesia facebook page has posted the trailer of the film with caption “coming soon”. The exact release date has not been announced yet.

Her Blue Sky tells about high school student Aoi Aioi (voiced by Shion Wakayama) who aspires to be a musician. After an accident that killed her parents, she lives together with her sister Akane Aioi (Riho Yoshioka) who gave up her ambition to take care of Aoi. Because of this, Akane has to end her relationship with Shinnosuke “Shinno” Kanomura (Ryo Yoshizawa), a struggling guitarist who wants to make a living in Tokyo.

One day, Aoi was invited to perform at a music festival as a session musician by a famous enka singer named Dankichi (Ken Matsudaira). At the same time, Shinno returns to Aoi and Akane’s town. Then, a mysterious Shinno from the past also appears to the present and Aoi start falls in love for the first time.

Her Blue Sky is directed by Tatsuyuki Nagai with Mari Okada as scriptwriter while Masayoshi Tanaka acts as character designer and chief animation director. The three of them has already worked together on same projects, including Anohana, and The Anthem of the Heart. The animation is produced at CloverWorks. Her Blue Sky has been aired in Japan on October 11, 2019. 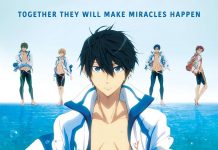