Yesterday, love was such an easy game to play
Now I need a place to hide away
Oh I believe in yesterday

To be honest, there is nothing in the anime that seems to suggest that the title is a reference to The Beatles’ Yesterday. Yet in the earlier episodes, it is easy to be reminded of the song while watching the anime. Just like the song, Sing “Yesterday” For Me is the story of someone who wishes they lived in the past; someone who finds living in the present is full of regrets. In a broader context, Sing “Yesterday” For Me is a story of someone who is confused with their own present. Confused because when they want to face the current problem, the past seems to be comfortably lingering in their mind, even though that past is probably unrelated to the current problem.

To put it simply, it is a story of someone who tries to move on, but they can’t, because they just… can’t.

Because one couldn’t just let the past go away

In an ordinary convenience store in Japan, shopkeeper Rikuo Oozumi sits down, observes the crows that stray around the place, and goes into thinking. He has just graduated from a university, yet he seems confused about what to do next and he is not trying to search for a job. When his friend visits and asks him what happensed, he answers that he still doesn’t have anything he wants to do, so he wasted his time thinking, thinking, and thinking. Ironically, thinking about what he wants to do will never solve his problem. He just refuses to challenge his status quo.

Some encounters with two individuals finally challenge his thinking. The first is with Haru Nonaka, an eccentric high school dropout who harbours feelings for Rikuo. Just like Rikuo, she is also dissatisfied with her life, but unlike him, she does something about it. Haru also has her own insecurity, yet she doesn’t make excuses and moves forward. Haru is a character who never holds back in expressing her feelings. While Rikuo can’t accept her feelings, at least he acknowledges her action and somewhat respects that.

The second is with Rikuo’s crush from his university days, Shinako Morinome. After working in Kanazawa for a while, she has come back to Tokyo. When he meets with Shinako, he remembers that there is indeed something he used to care about. He never confessed his feelings back then and he thought they would never see each other again. This unexpected reunion means he has a second chance. While Haru’s action may give him courage, Shinako is the one who gives him the reason.

For 12 episodes, viewers will see how Rikuo, Haru, Shinako, and other characters deal with their relationships and insecurities. And what is relatable is that even when the characters already made decisions, they are also unable to let go of the past. The anime seems to make sure that forgetting the past is not something that anyone could do. The anime has a lot of flashback scenes, and memories of the past seem to affect the characters’ decision making, even unrelated ones.

This is why a lot of people could relate to the characters in the anime. Like it or not, our past influences our decision making. We constantly recall, remembering what happened in the past to make decisions. This anime acknowledges that the past is a part of a character. The characters’ past is, in this anime, one of the aspects that define their character.

It is probably never about the past

At first, it seems that the anime wants to tell the story of people who want to move on from their past. “Forget that,” “we should never look back on it,” are some advice we may have often heard in real life, after all, especially regarding unsuccessful romance and broken hearts. Since the characters here are people who are affected by their past, it is logical to think that the most common resolution in this kind of story is to make the characters move away from their past.

However, some characters in the anime seems too stubborn in clinging to the past. It makes viewers become annoyed by certain characters. Shinako is probably the most obvious example here. Her past greatly affects her relationship with Rikuo and her childhood friend, Rou Hayakawa. Just like Rikuo, Rou also has affection for Shinako. Yet, Shinako refuses to make a choice because of her past.

Because of that, Shinako becomes an unpopular character among viewers of the series. It is not that viewers are unable to sympathize with her, but her action is quite frustrating to watch. Leaving her past and moving on seems to be a logical choice. Yet Shinako is indecisive, unwilling to just let go. In a sense, she resembles Rikuo in earlier episodes: Someone who rejects to challenge the status quo.

But the conflict is also not that simple. Near the end when Shinako is finally ready to let go, she just can’t. It is not about the past anymore, but rather, the present. There is still a lot to think before making a decision, even without considering what happened in the past. It is not the past that hinders the characters here, but the inability to make a decision.

Which is why the story is probably not about someone who tries to escape from their past, but rather, it is a story about someone who tries to be honest with their past. If we frame the story this way, Haru and Rou become important characters in the story. Just like Rikuo and Shimako, they have their own insecurities. But unlike their older counterparts, they are honest. Their past also affect them in some way, however, they accept it as part of their lives and move forward.

There are two other characters that hammer the point of this message, Kouichi Minato and Chika Yuzuhara. They are only in focus in one episode, but they are important because they make a point about being honest with your feelings. Kouichi is a blunt person who has a clear preference for photography, which makes him the opposite of the restless Rikuo. Chika’s story is where the message is most visible. She is a rebel who refuses to be controlled by her parents, yet she still plays the piano even though it is one thing that her parents compel her to do. At the end of the sixth episode, Chika acknowledges that she likes the piano even though she acts as if she hated it. By the end of their stories, Kouichi and Chika show that being honest with what you feel, even though that is not the best thing for you, is admirable.

The idea of being honest with your feelings sometimes will make the character in this anime unsympathetic. In some ways, yes, it makes the characters feel egoistic. Some characters make decisions by prioritizing what they want, and by doing that, they reject the typical resolution that normally happens in this kind of story, which probably could infuriate some fans. But once again, it is not that simple. Even when the previous conflict is resolved, another conflict will happen, and another decision has to be made. What is important is not how to make the best decision, but having the courage to make the decision itself.

Not to mention, deferring making a decision could actually hurt all related parties. Rikuo and Shinako already shown that at the end of the anime. That’s why making a choice is important, even though it is probably not the best choice to make. At least by being honest on what you want when making a decision, it gives you the resolve to face the conflict that will come next.

Sing “Yesterday” For Me review is continued into the next page 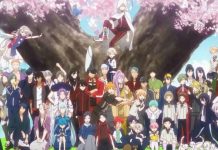