Usa Gyoro! is described as a “healing” (iyashi-kei) manga about Mamemoyashi’s goggle-eyed pet rabbit, Gyoro. While Usa Gyoro! – Young depicts the first time the manga artist adopted Gyoro. The books are published by Shogakukan under its “Flower Comics” label. 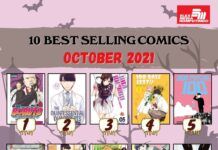