Gangsta novel itself is a novel written by Junichi Kawabata. In Japan it firstly published on August 1st 2015 last year. This novel was published by Shinchosa publisher and being serialized in Shincho Bunko in Japan. This novel told the original story from the Gangsta‘s comic series. 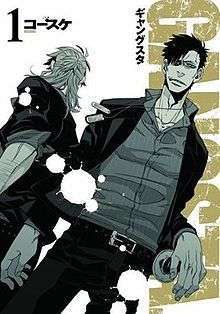 While Gangsta is a comic series created by Kohske that has been published by Shinchosa publisher in comic Magazine @bunch from 2011 ago. Gangsta told about Worick and Nicholas, two people who addressed as ‘Benriya” and dedicated to do any job for money in a city full of criminals called Ergastulum. After they did a job given by a police that they knew, Alex, who was an ex-prostitute joined them. From that moment they realize that the task given by the police to stop new gangs appeared in order to not disturb the mafias’ activities in that city, wasn’t a task that they usually did.

ReLIFE Comic Coming Out in September

Vocal Auditions for “Carol & Tuesday” Anime is Open for Application...

Smartphone game, “MASS FOR THE DEAD”, based on “OVERLORD” anime and...