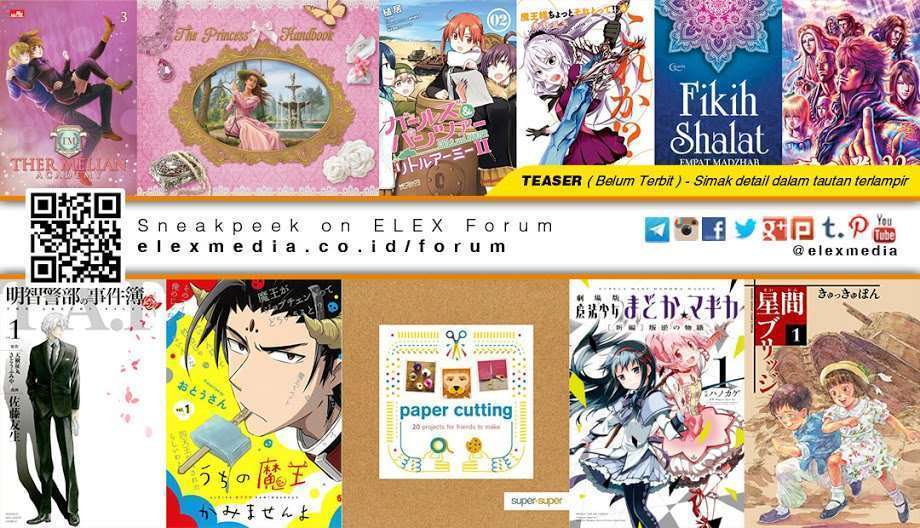 On wednesday (20/12), Indonesian publisher Elex Media Komputindo has announced plans to publish the manga Satan-ku Nggak Gigit, lho (Uchi no Maou Kamimasen yo or Our Satan Doesn’t Bite) and Puella Magi Madoka Magica the Rebellion Story manga in Indonesia. The announcement was revealed in Elex Media’s sneak peek published in Elex Media forum. In the list, the comics are scheduled to be released on 17 January 2018. However, The release date is tentative and can be changed without notice.

Here is the synopsis of Satan-ku Nggak Gigit, lho from Elex Media forum:

“Here is a a story about Satan, a “pet”, and his young master. Sometimes, Satan likes to play football, being afraid with a hero who is his neighbour, or stealing his master’s ice cream. This is a comedy story about Satan’s happy daily life.“

“Every night, Puella Magis have been protecting Mitakihara from nightmare, the embodiment of bad dream. Since Homura joined, now they become a team with 5 members in total. While they have to fight stronger enemy, they still spend their daily life happily. But there is something wrong with that.“

Written and illustrated by Otousan, Uchi no Maou Kamimasen yo was serialized in Square Enix’s Gangan Online Magazine. The manga started its serialization in July 2014 and has ended in November 2015. The manga had also been released in collected volumes with four volumes in total.

Puella Magi Madoka Magica the Rebellion Story is an adaptation of anime with the same name. The original story is written by Magica Quartet, a group of people consisted of director Akiyuki Shinbou, writer Gen Urobuchi, character designer Ume Aoki, and producer Atsuhiro Iwakami. In Japan, the manga is published by Houbunsha, and consisted of three volumes in total.