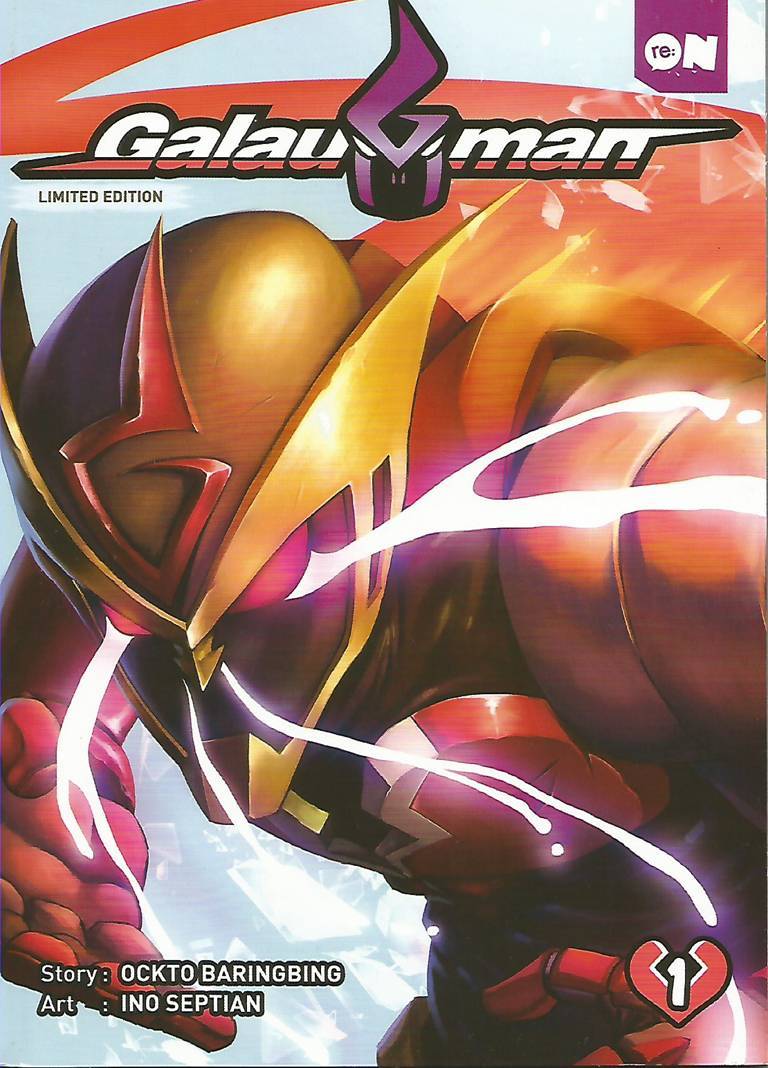 Galauman is one of the longest running comic series in the Indonesian comics compilation magazine, re:ON Comics. Written by Ockto Baringbing with art by Ino Septian, the series debuted in re:ON volume 2 back in August 2013, and has entered its 16th chapter as of re:ON volume 17 that has been released in November 2015. Recently, the first twelve chapters of the series have been collected into a standalone volume, complete with a bonus never-before-seen chapter. Limited edition cover of the collected volume was also offered at the Indonesia Comic Con 2015.

Galauman tells the story of Gabriel Laurent, a young man who gained a mysterious power to transform into an armored superhero called Galauman when rejected by girls. The Indonesian word galau can refer to feelings of emotional distraught. The word is popularly used by contemporary Indonesian youths to express their feelings when experiencing loneliness, unrequited love, being rejected when confessing their love, or heartbroken when ending a relationship, among other things. As Galauman, Gabriel eventually battled various villains who also gained super powers from feeling galau.

At a glance, the idea of a hero who gained his super powers only when rejected by girls seems too silly to work. Such ability is far from the image of cool and awesome like typical superheroes. Even in the story itself, a reporter noted to Galauman that getting powers from such a means is pathetic. But the duet of Ockto and Ino managed to execute this idea brilliantly, turning it into a solid and amusing comic series.

First, by putting galau as a source of super powers, Ockto is able to skillfully incorporate galau expressions and situations into playful comic scenarios, manifested through the quips of Gabriel and his opponents in their fights. Also, it enables the comic to lightheartedly discuss some serious reflections on galau feelings, by contrasting Gabriel’s commitment to protect the weak and innocent even through his unfortunate love life, compared to the villains’ who used their powers to lash out at the people or environment that has disappointed them and make them galau.

Aside from taking up the theme of galau that is very familiar to young readers, Ockto also shows his knack on utilizing inspirations from ordinary daily life through the variety of powers introduced in the comic. Galauman’s opponents posses super powers based on smartphone-operated social media apps. One of the villains, for instance, has the ability to teleport using forskwer (a pun on foursquare) app on his phone, instantly going to any place he had previously checked in to.

Such social media technologies have become a taken-for-granted aspect of daily lives for many urban Indonesians. But Ockto went beyond the average persons’ acceptance of those technologies and managed to incorporate them creatively into a comic world scenario as a basis for super powers. To be able to make something extraordinary from things that most people dismissed as ordinary is truly a sign of creativity. If there’s something lacking in the comic, is that the puns are kinda lame.

Galauman also distinguish itself with Ino’s distinctive art style. With energetic lines, dynamic compositions, strong expressions, and cute girls, Ino constructs a comic that feels lively, complete with wild and impactful action scenes. It should be noted that Ino has recently changed his drawing process for Galauman. Previously, he drew the comic fully with digital tools. But starting from chapter 14, he sketched and inked the comic manually before toning and inserting texts into the comic with digital tools.

All of the chapters collected in the standalone volume are the ones that were still produced with the old process, except for the newly made bonus chapter. The bonus chapter noticeably looked more raw and rough compared to the other chapters in the book. The reception to this difference depends on the readers’ personal preference, of course. For some, the newer output might be considered less polished than the fully digital-made chapters; while for others, the rougher look might be seen as something unique.

The bonus chapter in the collected volume itself is a nice side story focusing on the reporter girl who is obsessed with investigating Galauman’s secret identity. Not only it is an entertainingly funny addition to the Galauman narrative, it also helps to further develop this supporting character. In the future, would she become a more significant character, not only in the story, but also to Gabriel’s life? Only time will tell (maybe).

Overall, Galauman is captivating because it playfully picks up familiar daily life experiences into superhero scenario, along with its distinctively lively art style. It is a welcome addition to the world of Indonesian comics that can resonate well with contemporary readers.