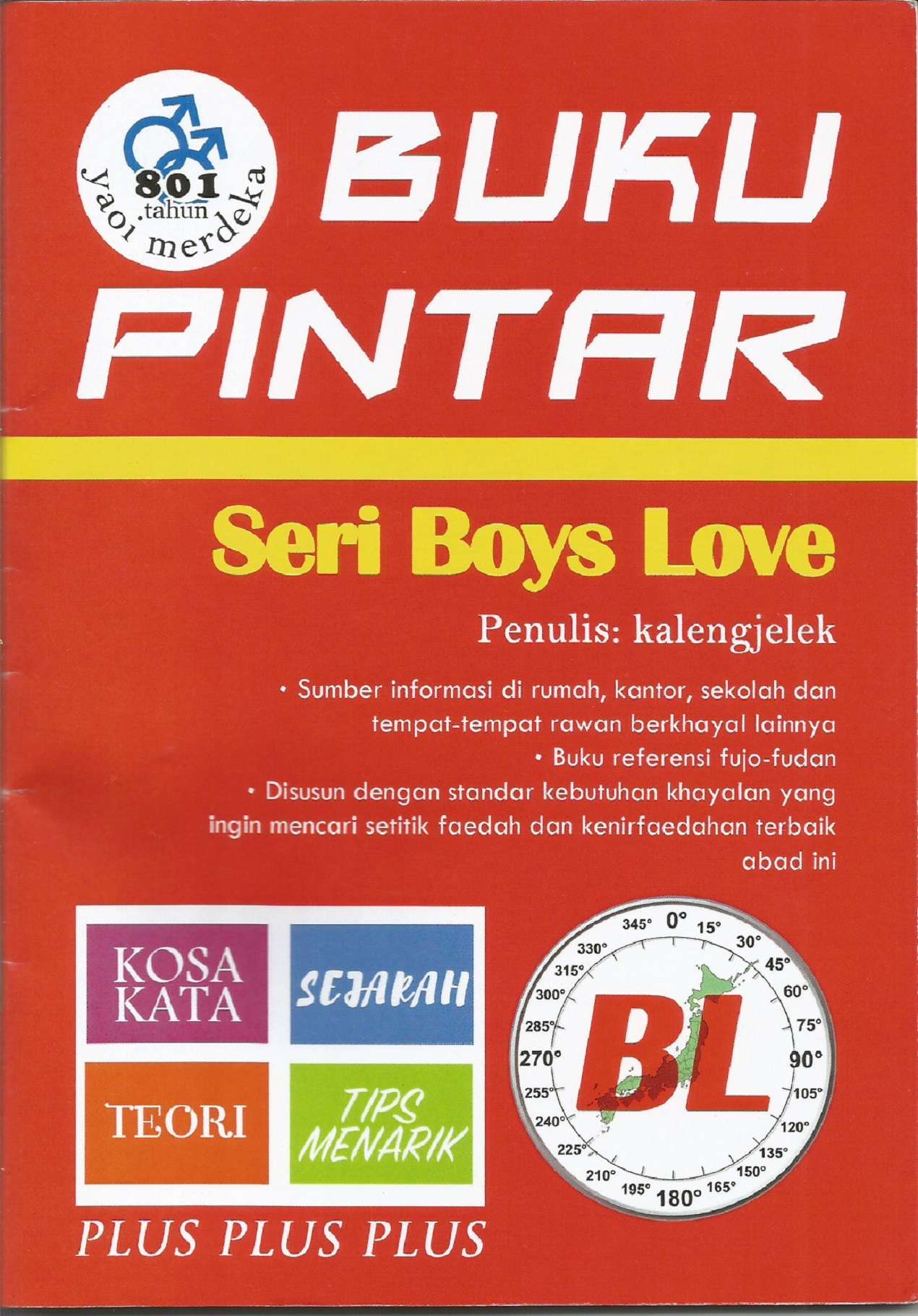 While doujinshi is often associated with self-published works based on existing works (what is also called nijisousaku or parodii), it actually also encompasses original works, and even non-fiction contents. Among the many genres of doujinshi is “informational doujinshi,” which contains fan-produced knowledge on subjects such as Gundam, and can even be a channel to publish research on fan-related topics, such as what Mitsuru Souda did with his research on moe (see interview in Galbraith, 2014). In the data from 30 years overview of Comiket (Japan’s largest event for selling doujinshi), it was estimated that “critiques and various information booklets” made up at least 1.4% of the participating circles’ genres in Comiket (Comic Market Preparations Committee, 2008).

With that in mind, it’s interesting to see “informational” type of content has also emerged in Indonesia’s doujinshi scene. What we are going to take a look into here is a self-published booklet titled Buku Pintar: Seri Boys Love produced by an author identified in the booklet by the pseudonym “kalengjelek.” The booklet, I think, shows the potential of fans to self-produce knowledge about the things that they love, in ways that are familiar to the fans’ own discourse, while also opening a space for constructive dialogue and engagement.

What kalengjelek’s booklet contains are various information regarding boys love (BL) genre, yaoi, and the fujoshi/fudanshi fans of such genre. The information range from historical overview; criticisms, debates and censorship surrounding BL and yaoi; list of resources for BL contents on the Internet; travel guide to BL havens in Japan; and glossary. The information are presented in the style of Buku Pintar, a series of handbook or almanac created by Indonesian writer Iwan Gayo, from the cover design elements to boxes providing related details or specific examples. Thus, akin to how fans may create “parodies” of existing works into BL or yaoi narratives, so too this booklet “parodies” a popular general knowledge reference book to speak about BL and its fans. Humorous afterword and topic headers with famlilar fujoshi self-deprecating jokes also lends some friendly, relaxed feel to the presentation.

But despite the parodic and humorous aspects, the booklet is built upon a strong foundation. The reference section near the end of the book cites dozens of books, essays, and researches on BL and its fans from writers and scholars from Japan and other countries. Although the foreword says the booklet is made for fun, it also mentions that the author have researched about BL for undergraduate study purposes before, so the contents are drawn from the references from that past research. They provide some reliable details and varied perspectives that give more nuance in discussing the origins of BL or in discussing controversial issues such as opinions from gay people and feminist views towards BL. As Rachel Thorn put it, there is a range opinions from Japanese gay men towards BL, and likewise, a range of attitudes from BL fans regarding LGBTQ issues. It is important to raise awareness of that multifacetedness of the discourse on BL. 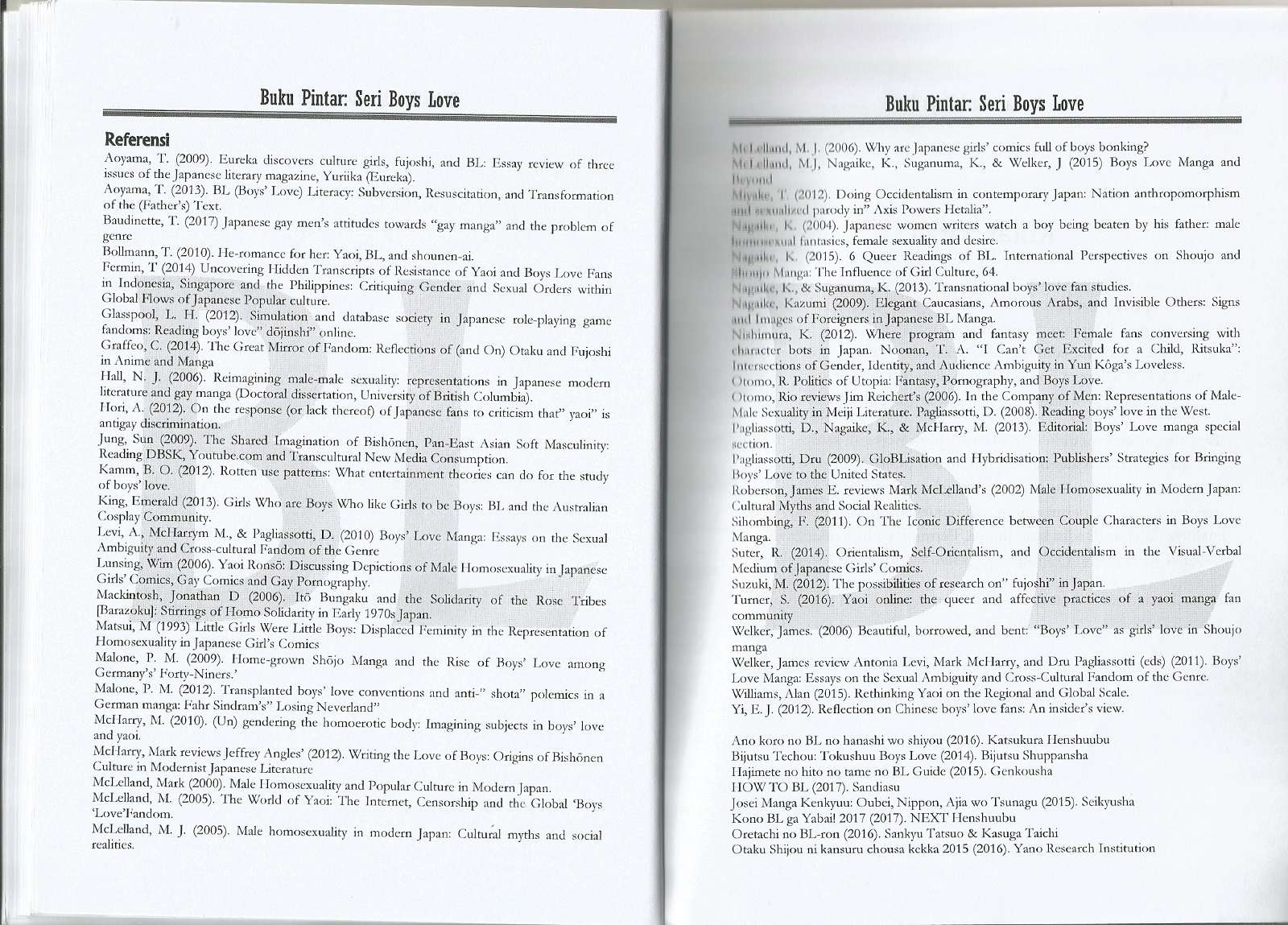 The materials cited is not an exhaustive list of references about BL/yaoi and their fans, of course. If there is possibilty for the booklet to get updated edition, perhaps the author can also refer to more recent additions into the discourse on BL such as queer vlogger Masaki C Matsumoto’s video “A gay man’s opinion about yaoi/BL” (2018) to add more varied perspective on the response of gay people towards BL. Or, another addition would be to discuss the issue of how fujoshi in certain communities deal with the tension between their religious identity and their identity as fans of BL, such as can be found in the works of Jessica Bauwens-Sugimoto (2016) or Ni Nyoman Wira (2014), which can be relevant to Indonesia’s situation in the “globalization” of BL.

Nevertheless, the booklet is still impressive in its references, and may introduce some new aspects related to BL for readers. From discussion on how various foreign cultures such as European or Arabic are depicted in BL, to the glossary of terms that BL fans use to communicate their fantasies, for BL fans they can help to expand their understanding of the genre that they love, while to outsiders it can help to learn more what BL actually is like through an insider’s critical perspective. And with the references cited, it is more comfortable to make a constructive response to the work that has been put into the booklet, and to expand the discussion from what has been written in the booklet, as it is easier to look into what the author has and has not read.

And it is very intriguing to think that this kind of knowledge is released in this self-published manner, along with various fan-made works and goods at Comic Frontier, the local version of Comic Market.  It is exciting to see how fans themselves have the potential to self-produce their own body of knowledge regarding the things they love. It’ll be interesting to see if in the future more contents like this may appear at doujin market events in Indonesia.

Update: the author has of the booklet has made the work available to be read online for free. 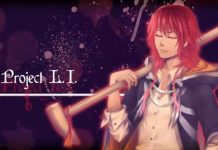