Part 5 of the JoJo’s Bizarre Adventure series now takes place in the city of Naples, Italy, 2001. Although famous for its beautiful panoramas, the city was apparently filled with criminals who disrupted its citizens’ lives. One of the culprits was Giorno Giovanna who turned out to be the son of DIO Brando, the vampire who had been killed by Jotaro in Egypt. Behind the petty crimes he committed, turned out he had a dream to improve life in Naples by becoming the number one Italian mafia alias Gang-Star. He then met Bruno Bucciarti, a member of Passione group who was assigned to find one of the members who suddenly disappeared.

There is a saying that JoJo’s Bizarre Adventure‘s odd-numbered parts have slightly more ‘serious’ main story and character, while the even-numbered parts are more ‘relaxed’. This is what it feels with JoJo’s Bizarre Adventure: Golden Wind with Giorno Giovanna as its main character. In contrast to the colourful and stylish costume, Giorno’s character is portrayed as cold as his father, DIO, with “gray” morality. Moreso with the setting, the city of Naples, which is depicted as being so grim with all the criminal acts, in contrast to the use of bright and slightly little more realistic color in the previous part.

Watching JoJo’s Part 5 feels like watching a crime drama presented in the typical JoJo series style, like the super fashionable and quirky characters and over the top action. The first episode still haven’t introduced many things other than Giorno and his stand, Gold Experience (taken from one of Prince’s album), plus Bruno Bucciarti. As a connection to the previous part of the story, Koichi and Jotaro still appear here. Those who are curious about the other characters (as well as the strength of the stand) of the Passione mafia gang seems have to wait for JoJo’s Bizarre Adventure: Golden Wind‘s further episodes.

And when it comes to songs, arguably the song that has debuted in the second episode manages to present a glamorous feel through the opening song, sung by Coda, and 90’s era RnB song from Jodeci, “Freek ‘n You“, as its ending song (although at first I guessed the song “Gold” sung by Prince would be the ending song). 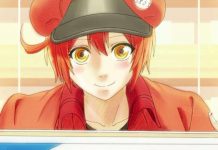