On Tuesday (13/9), Indonesian film distributor Feat Pictures has confirmed the release of Kyoto Animation‘s latest Violet Evergarden project, Violet Evergarden: Eternity and The Auto Memories Doll, in Indonesia. The Twitter post stated that it’s “coming soon to Indonesian cinemas” with the film poster and hashtag #PrayForKyoaniが世界に拡散. Detailed information about the premiere date andthe cinema chain that will screen the film has not been announced yet. This would be the seventh work from Kyoto Animation to be screened in Indonesia after Tamako -Love Story- (limited screening at Japanese Film Festival in 2015), A Silent Voice (general release in 2017), the two Free! Timeless Medley films (general and limited screening in 2018), Free! Take Your Marks (limited screening in 2018), and Chunibyo Demo Koi ga Shitai: Take on Me (released in 2018)

This announcement comes following the distributor’s poll on Twitter asking the followers’ interest to see Violet Evergarden: Eternity and The Auto Memories Doll in Indonesia, which gets a 63% of voters expressing their interest to see it. in the reply section, some voters also expressed their grief and support for Kyoto Animation after the arson attack that hit Kyoto Animation last July.

Violet Evergarden: Eternity and The Auto Memories Doll (Japanese title: Violet Evergarden Gaiden: Eien to Jido Shuki Ningyo) tells the story of Violet Vergarden,  an ex-soldier who becomes a ghostwriter for those who can’t express their own feelings into letters. In this story, she will meet Isabella York, a daughter of a wealthy family who feels restricted with her noble life. Yui Ishikawa will also reprise her role as Violet Evergarden, while new character Isabella York will be voiced by Minako Kotobuki.

Although the studio was struck by an arson attack on July 18, 2019 that has killed 35 people, on July 27 it has been confirmed that the Violet Evergarden side story will still be released on September 6, 2019, in Japan with an extended screening period of three weeks from the previously planned two weeks. It has also received an early special screening in AnimagiC event in Mannheim, Germany.

Violet Evergarden is adapted from a novel with the same name by Kana Akatsuki. The novel won the grand prize in the fifth Kyoto Animation Award in Novel category. It was first published on December 25, 2015, by KA Esuma Bunko, a light novel imprint established to publish the work that received prizes in Kyoto Animation Award. The novel has previously been adapted into a 13-episodes anime TV series that aired from January to April 2018, followed by one OVA released in the same year. Kyoto Animation has also planned to release a Violet Evergarden film in January 2020. 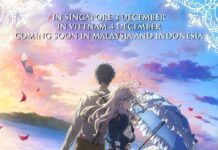