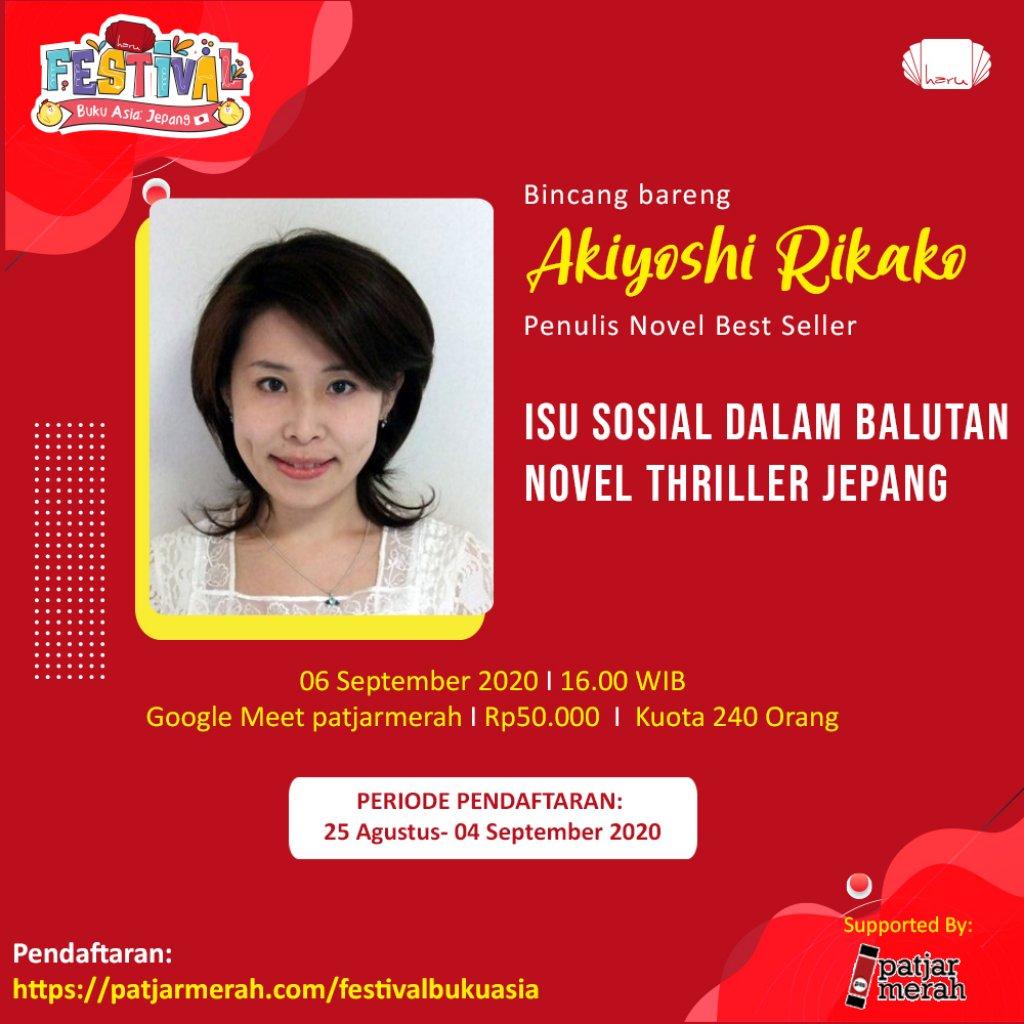 It is hard to fully separate fiction with the context of real-life social issues around their creation. The scholar Motoko Tanaka has written about how survival game-type (Sabaibu-kei) stories gained popularity in early 2000s Japan due to neo-liberalistic economic reforms and the widening gap in society between the rich and the poor. Our society, in a sense, can influence how a creator creates their story and how the readers perceive it. This is why discussing social issues with a creator could be fascinating, especially if those issues are often depicted in the creator’s work.

On Sunday (6/9), Indonesian book publisher Penerbit Haru has invited KAORI Nusantara to participate in an online discussion in this matter as a part of Asian Book Festival (Festival Buku Asia) event held by the publisher. The guest speaker of the discussion was Japanese novelist Rikako Akiyoshi. She is famous for writing mystery-thriller novels like Girls in the Dark, Scheduled Suicide Days, Death Returns, and many more. Some of her books have already been adapted into manga and film. In Indonesia, some of her books have been published by Penerbit Haru.

As a writer, Akiyoshi-sensei is known for writing thriller stories that depicted themes like suicide, depression, or violence. But according to her, she wasn’t interested in writing about these themes at the start. She started her career writing more “regular” stories. It is her editor that pushed her to a different direction.

“Mystery was not my first choice. My first novel is nothing like it, at all,” she said, but one of the book editors who read her first book suggested her to write a mystery, “I didn’t think I’d be good at writing mystery at first, but she asked me to try. So I wrote Girls in the Dark and sent it to her. It turned out many people liked it.”

One advantage of the mystery genre, according to Akiyoshi-sensei, is that it could raise social issues naturally. Mystery, after all, is a genre that encourages readers to think. So it suits what she is trying to aim. “At first, mystery readers read a book to be entertained. But after they have read it, they will naturally think about the story and what actually happened. The readers probably don’t realize it, but they start thinking about the issue behind the story.”

While social issues are something that Akiyoshi-sensei often depicts in her books, she doesn’t really want to promote a certain political view like feminism. She just hopes people will try to understand others, rather than imposing their own values. In the discussion, she used a character from her novel Absolute Justice, Noriko, as an example.

“Noriko is a person who wants to do the right thing. But when doing what she thinks is right, she starts hurting others. I want to say that there is no such thing as being ‘absolutely right’. That’s why we need to understand others,” she said. “We can also see this in real-life Japan. In the current situation of pandemic, there are people who are going so far as throwing stones to places like a restaurant. Even when there is pandemic, that shouldn’t be acceptable.”

Thus, by raising social issues from Japanese society in a mystery story, she encourages the readers to think about the issue and understand others. When someone in the audience asked about the issue of teen suicide, she stated that she hopes her book could make people who think about suicide to reconsider their view. “I hope that when they try to search for ‘suicide’ on the Internet, my book will come out in the result, they will read it, and think that life isn’t so bad after all.”

Another interesting point in the discussion is on her creative process. For research, she has to read a lot of books and watched many DVD about the subject that she tried to write. “For Giselle,  I read as many books about ballet as possible, both in Japanese and English language. I tried to research its history, technique, training, and many other things. I even went to see a ballet performance and tried to pay attention to the simplest thing, like how the dancers move their body. Form there, I build my understanding of ballet and implement that in the story,” she explained.

Of course, not everything that you have learned needs to be explained in the story. According to her, You only need to write information that matters in the story, so the writer can avoid giving too much exposition. “I read a lot of books while researching, but the key is getting the essence of it and find the information that can drive the story forward.”

For inspiration about mystery and social issues, Akiyoshi-sensei stated that she could easily find inspiration in many things around her. “Sometimes an idea just popped up in my mind. When that happens I just write it in a note. I do that each time I get a new idea. When it comes to writing, sometimes those ideas just magically come up in my head again and automatically build a new story for me. So if you have an idea, even a small one, you should write it.”

Her experience living outside Japan has also shaped how Akiyoshi-sensei thinks and writes. “When I was living in Japan as a little kid, I didn’t know much about the world, but then I moved to Los Angeles. This place is a melting pot.; there are a lot of things happened, I was exposed to lots of different cultures and religions. That’s how I learned to appreciate  different cultures, people, and religions.”

“In Japan, there are people who are allergic to other religions. With my writing, I want people to start trying to understand others. I know there are scary things like murder and killing in my novel, but what I am aiming for is actually respect and understanding to others,” she explained.

But isn’t it hard? Asking the reader to read a mystery-thriller story that discusses heavy social issues  is already hard enough, let alone making them understand others. In this case, Akiyoshi has her own way of writing. In her novel, she always refuses to make statements about what is “right” or “wrong”. Her aim is to create a discussion between readers about something that is morally ambiguous. Hopefully, her book could become a discussion platform between readers while respecting others’ point of view.

“I want my readers to think about what’s written and discuss about it. But I hope people would never discuss it by saying ‘you’re wrong’ or ‘I’m right’. I want people to keep their minds open about social issues while reading my work,” she concluded the discussion. 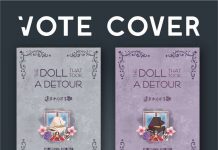