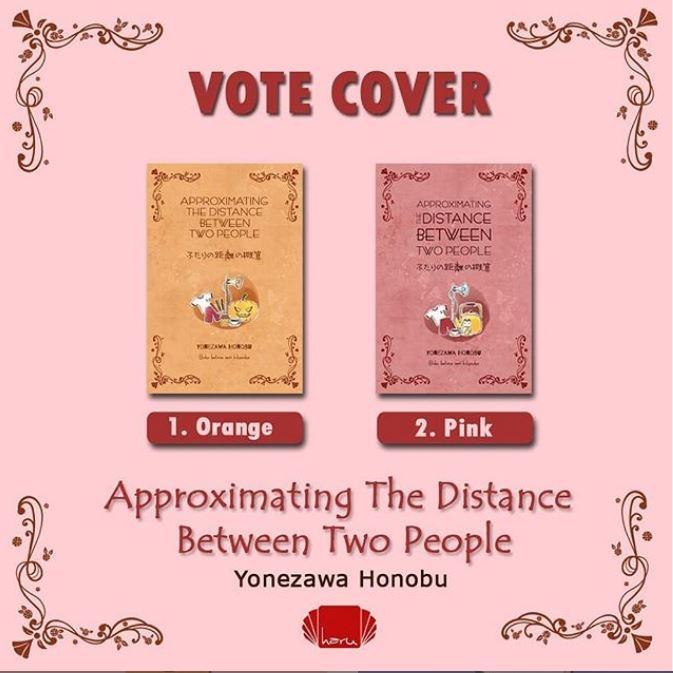 Previously, it has been announced that Indonesian publisher Penerbit Haru will publish the fifth book of Kotenbu series, in the second half of 2020. On Monday (8/6), Penerbit Haru’s social media has updated the information regarding the book. The title of the Indonesian edition will be Approximating The Distance Between Two People, the book will be released this June.

Just like the previous books, Penerbit Haru also holda vote for fans to choose which version of the book cover should be used. On Thursday, the orange colour has been chosen for the book cover.

The fifth book will tell the story that has not been adapted in anime yet. In the book, the classic literature club members have entered their second year as Kamiyama High-School student. It starts when the main character, Houtaro Oreki, joined a marathon competition held by his school. While leisurely jogging on his way to the finish line, he met his friend Satoshi Fukube. Together, they discussed a weird incident that happened recently at the classic literature club, which involved the new member Tomoko Ohinata.

The novel series has inspired an anime adaptation in 2012 produced by Kyoto Animation and also a manga adaptation in the same year. The novel had also been adapted as a live-action film that debuted in November 2017.

In Indonesia, Penerbit Haru has published the first three novels in the series. The first novel is released in December 2017 with Indonesian edition cover designed by Cynthia Yanetha and translation by Andry Setiawan. The second, third, and fourth book also have been released in Indonesian with the cover that voted previously by fans.