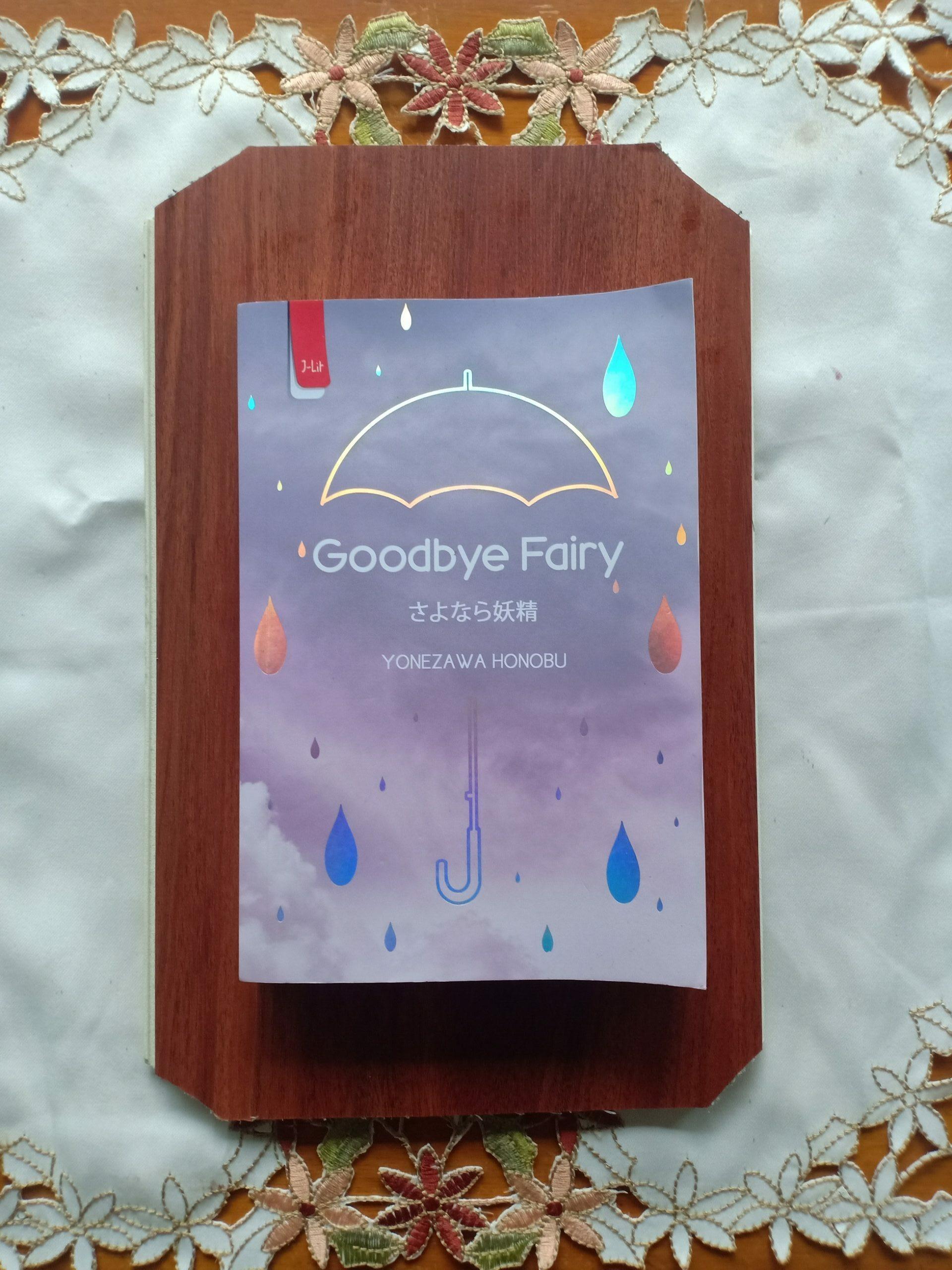 In 2012, I saw Hyouka, Kyoto Animation’s anime adaptation of the Kotenbu (Classic Literature Club) series of novels about a high school student who solves mysterious problems around him. As someone who only knew mystery from reading Sherlock Holmes books, it was a new experience for me to see how this genre can also feature low key everyday life mysteries. There’s no murder or other violent crimes, but Hyouka still made me a fan with how the show can make me think and be curious about how the story will end, even if it’s only about finding a bunch of books or guessing the true meaning of a school announcement.

As such, it was delightful to hear in 2018 that Penerbit Haru would publish the Hyouka novel in Indonesia. I immediately bought the first volume as soon as it was available, even though I have watched the anime so many times to the point that I remember every single scene in the story. When the sequel book was released by Penerbit Haru months after, I even pre-ordered it, and so on with the next two books in the series.

But then, surprisingly they did not immediately continue with the fifth volume (which I had been really curious about since anime did not cover the story in that book). Instead, Penerbit Haru announced that they would publish a novel that “used to be part of Hyouka series, but because of some problems with the publisher, it got cancelled, and picked up by a different publisher, though the author needed to change the story since it would be released as its own novel, separate from Hyouka.”

The novel’s connection to Hyouka that Penerbit Haru advertised certainly drew some curiosity, and there weren’t much information about the book in English either, for it hasn’t been translated into English. Interested to know more about it, I went ahead to get this book called Goodbye Fairy.

So What is Goodbye Fairy?

So what does this book actually have to do with Hyouka? Goodbye Fairy (さよなら妖精, Sayonara Yousei) is a mystery novel first published in Japan in 2004 by Tokyo Sogensha. This novel was originally written as the continuation of to the Kotenbu series after Credit Roll of the Fool when the series was still published under Sneaker Mystery Club (A sub-label of Kadokawa Sneaker Bunko). However, the label was shut down, meaning the series couldn’t continue. Tokyo Sogensha was interested to publish the manuscript of the novel, but of course, with the characters and some aspects of the story changed to make it a separate novel from the then cancelled series. Meanwhile, the Kotenbu series itself would eventually continue through Kadokawa Shoten with The Kudryavka Sequence as the third book.

With that background set out, how different from the Kotenbu series does Goodbye Fairy turn out to be? In this novel, we have two students from Fujishiba High School, Michiyuki Moriya and Machi Tachiarai, who one day encounter a foreign girl lost in the rain. The girl’s name is Maya, and she has come to Japan from Yugoslavia

Yes, you read that right. This novel is set in 1991, in the times of the political crisis that eventually lead to the dissolution of the federal Yugoslavia state into several independent states. What is a girl from Yugoslavia doing in Japan, then? In the novel’s narrative, the country has been sending its prospective youths, among whom is Maya, to other countries with the hopes that what they would learn abroad can later help them prevent the country from breaking apart. Maya herself is actually a daughter of a Yugoslavian diplomat, though she refused to rely on her father and tried to live and learn in Japan by herself, even taking a job as a waiter at an inn.

While Maya carries a lot of hopes for her own country, the story is not all about the conflicted state. The core of this novel, is also about how Japan is thought to be seen from a different, foreign perspective.

Let’s get back to Moriya and Tachiarai’s initial meeting with Maya first. After the two of them help Maya, they discuss some Japanese habits that Maya thought were weird. Maya then found a temporary place to stay, and the story continues with depictions of Maya’s daily life in Japan, while encountering various aspects of Japanese culture that she deemed interesting, to which she often asks: “is there any philosophical meaning behind it?”

In a sense, Maya’s curiosities about Japanese culture can be compared to Eru Chitanda and her famous “I’m curious” line. They even share a background of coming from a respected family, which they similarly shown through acting appropriately in serious situations. Meanwhile, Tachiarai and Moriya seem to take different aspects of Hotaro Oreki; with Moriya getting his lazy and cynical traits, added with some and “database” traits of Fukube; While Oreki’s analytical skill can be found in Tachiarai, who would explain almost all of the conclusion of the story in the novel. Tachiarai also shows some of the “don’t want to socialize” traits that sometimes makes her a troublesome character for Moriya. Reading those two characters interact can feel like seeing Oreki talking to himself.

With Maya’s curiosities towards Japanese culture, at a glance, the book can seem to be some kind of tourism guide made in the form of a novel for the purpose of introducing Japanese culture. The content of the novel delves into the symbolic meanings of the country’s culture and its people’s habits; such as the Japanese’s view of umbrella, the philosophy behind kyuudou (Japanese archery), and the meaning of mochi cake. We will be shown various things that are common sense for Japanese, but something new for readers outside of Japan. And we get to see this not only from the perspective of the Japanese only, but also from the perspective of a foreigner through Maya; for whom living in Japan is so new and different from her troubled home country. The author would show us Japanese culture from the view of Tachiarai and Moriya on one hand, and Maya’s reaction to it from her own different culture and perspective on the other hand, with responses from Moriya and his friends.

To some extent, reading this novel can be a good learning material to understand Japan from a different side. However, there are still many Japanese terms or behaviours that may only be more apparent to Japanese audience and could make foreign readers struggle to understand. There are footnotes that come with this translation to explain those things, but even then, sometimes I still can’t understand some parts of the story. The footnotes also can make this novel reads less like a novel”, even though it can’t be avoided since the absence of footnote will just make the readers more confused.

There are also difficulties in understanding the story because of the translation. Translating a book is not just changing words from one language to another, but also translating the culture and behaviour of its speaker. In Goodbye Fairy, there are some Japanese phrases or terms that are difficult to be translated into Indonesian because of a lack of equivalent words to describe it. To solve this, the translator either uses a word with the closest meaning, write the Japanese phrase as it is then translating it literally, or using the footnote. For most occasion, they don’t help much, especially for those who don’t have much knowledge about Japan. Even for me, understanding small details in some parts the story is difficult because many foreign terms are not translated very well.

As I have asserted early on, Hyouka‘s notable characteristic is in presenting mysteries in daily life situations resulting in a cosy yet still challenging mystery story. Similar characteristics can also be found at the beginning of Goodbye Fairy, but from the middle to the end of the story, the topics can get significantly serious as they touch into politics, war, and human life.

On the other hand, we can also still see Hyouka’s strength in dialogues in Goodbye Fairy, with the characters having their own distinctive traits in speaking. There are Tachiarai and Moriya that always speak cynically; then there is also the polite Shirakawa; and, of course, our main character Maya, who often actively asks questions to the point of forgetting her own surroundings.

In the end, whether you are a Hyouka fan or not, this novel is still an interesting read for a mystery fan. For the Hyouka fans, it is appealing to read what Hyouka could be like with a different approach and background. While for those who aren’t familiar with the series, this novel presents a mystery that you might never see before. The dialogues between the characters are the strong point of this novel, and there is also the chance to get to know deeper about Japanese culture, not just from the perspective of Japanese, but also from the viewpoint of a foreign girl.

To conclude, the core of this novel revolves around how human wants to satisfy their curiosity, to encourage you to ask like Maya did in the vein of Chitanda’s “I am curious!” line: “is there any philosophical meaning behind it?”