In this world, the government is now dominated by women, and the creation and use of weapons are strictly forbidden. But that doesn’t end conflicts, so war is waged through words by the power of Hypnosis Mic. Those in the divisions outside of the women-only Party of Words thus use it for fierce rap battles as their weapon in the constant clash for territory.

Hypnosis Mic: Division Rap Battle is a Japanese multimedia project, based on rap and hip-hop, created by King Records under EVIL LINE RECORDS label.  After several adaptations in various media such as manga, live stage preformances, and mobile game, there is finally an anime adaptation. With its pick of music genre, Hypnosis Mic surely gives off a new vibe as music-themed anime. Rap in anime has often been used as soundtrack, and even to narrate the situation in anime like Samurai Champloo, Megalo Box, and Devilman Crybaby. Rap has also complemented shows like with Katsu-rap or Sasaki Tetsunosuke in the Baragaki Arc of Gintama. But with rap being the main topic of the show, Hypnosis Mic will immerse you more with the art of rap and hiphop. 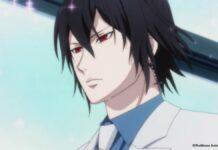