Previously, It was announced that Indonesian game developer Gamecom Team has developed a new third-person action-adventure game titled Parakacuk. On Monday (15/2), the developer has announced that the game demo is available on the steam page. The game itself is scheduled to be released on 29 October 2021.

The steam page describes Parakacuk as a game that focuses on the fight between school gangs. The player will take control of Budi, a new transfer student at 69 City Jancuk High School. Unfortunately, since Budi’s first day, he has been involved with various problems. Now, Budi will take revenge on other school gangs and become the leader of the school with his own gang called Parakacuk.

Other than PC, Gamecom Team’s website has mentioned the plans to release the game on Playstation, Xbox, and Nintendo Switch. The Steam page also mentions that the game will include mature content, from teenage violence, strong language, drugs, and even suicide.

Based in Jakarta, Parakacuk will be the third game published by Gamecom Team after A Day Without Me and Babol: The Box Adventure. Previously, A Day Without Me has been nominated as Indonesia’s most favourite game in the 2020 Indonesia Gaming Award. For Parakacuk, the developer mentioned that the game will be the biggest game they’ve developed, with a total of 54 Gigabytes of assets.

You can also support this game by donating to Gamecom Team on the crowdfunding platform Saweria. 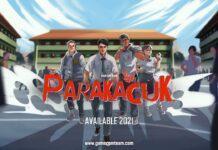