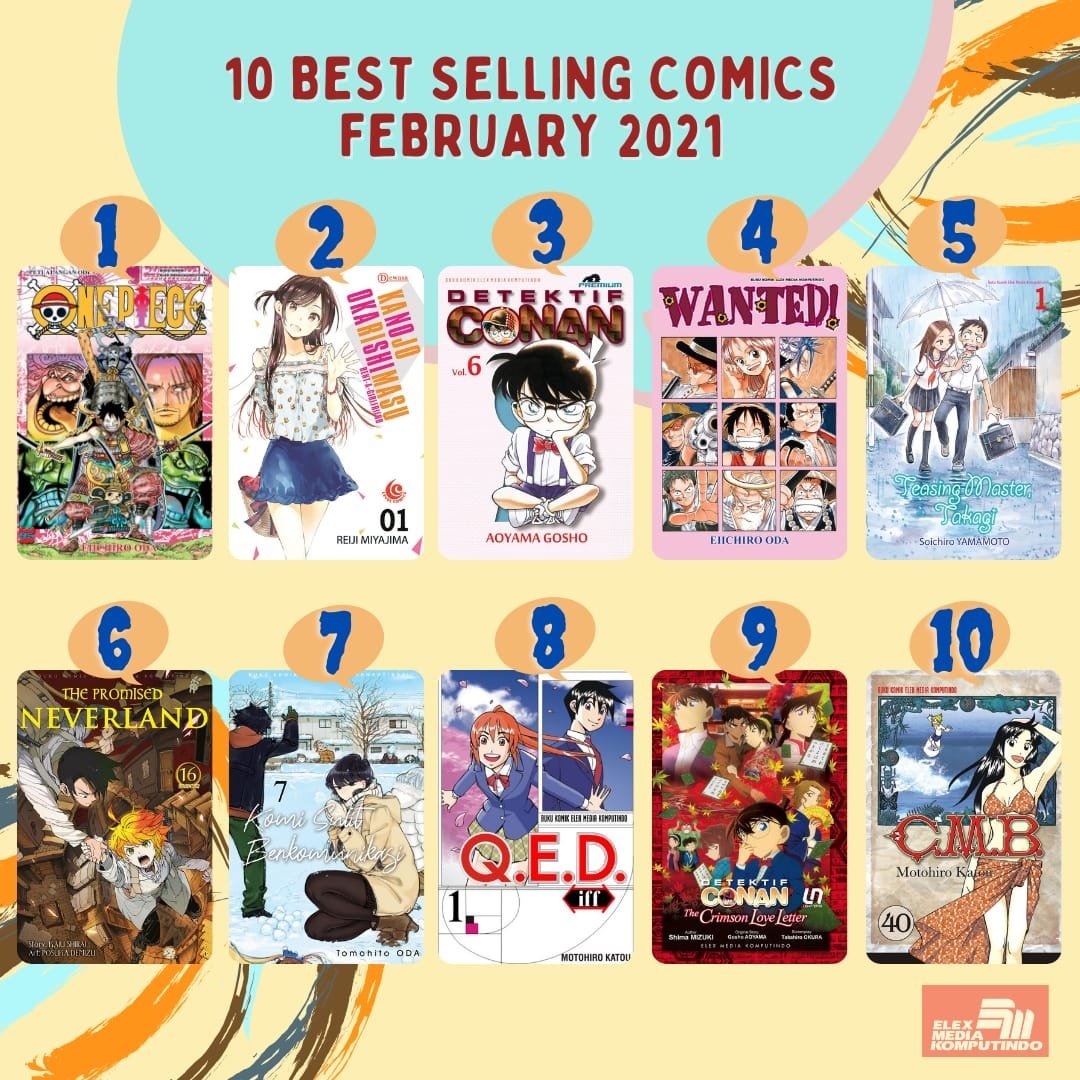 On 5 March 2021, the Twitter account of Elex Media’s editor of comics has posted a list of the publisher’s ten best-selling comic books in the month of February 2021. Three new manga series which had their first volumes released by Elex Media in February; Kanojo Okarashimasu: Rent-A-Girlfriend, Teasing Master, Takagi, and Q.E.D. iff made it to the list on the second, fifth, and eighth place, respectively.

Here is the full list of Elex Media’s best-selling manga in February 2021.

Reiji Miyajima’s Kanojo Okarishimasu: Rent-A-Girlfriend tells the story of Kazuya Kinoshita, who tries a rental girlfriend service app after being dumped by his girlfriend. Through that app, he meets Chizuru Ichinose who would be his girlfriend for a certain period. Things become complicated when Chizuru meets Kazuya’s grandmother, who is also treated in the same hospital as Chizuru’s grandmother. Moreover, it turns out that they actually go to the same university and live in the same apartment. Serialized since 2017 in Weekly Shounen Magazine, the manga has been collected into 18 volumes at the time of this writing. An anime series aired in 2020 with a second season planned.

Soichiro Yamamoto’s Teasing Master, Takagi tells of a girl named Takagi who enjoys teasing Nishikata, the boy she likes who sits next to her. Nishikata repeatedly tries to get back at Takagi with his own pranks, but Takagi always manages to outwit him. Yamamoto began serialization of the manga in Shogakukan’s Monthly Shonen Sunday Mini in June 2012 before it moved to Monthly Shonen Sunday in July 2016, with 14 volumes have been released at the time of this writing.

Elex Media’s editors had first teased Teasing Master, Takagi in September 2020, with the cover design for the first volume of the manga has been approved in December, and also confirms that the book will be printed on book paper. In 2020, Elex Media has also published Soichiro Yamamoto’s short story collection, Love Letter.

Q.E.D. iff is the continuation of Motohiro Katou’s Q.E.D. manga in Shounen Magazine R, after the cancellation of Shounen Magazine Plus where the first manga series was serialized. The main character is Sou Touma, a boy who has graduated from MIT at a young age but decided to enrol in high school in Japan to know what it feels to be a high school student. In Japan, he often gets involved to investigate cases together with his friend, and an athletic girl named Kana Mizuhara. The first manga series is collected into 50 volumes, while Q.E.D. iff is still ongoing and has been collected into 16 volumes at the time of this writing.