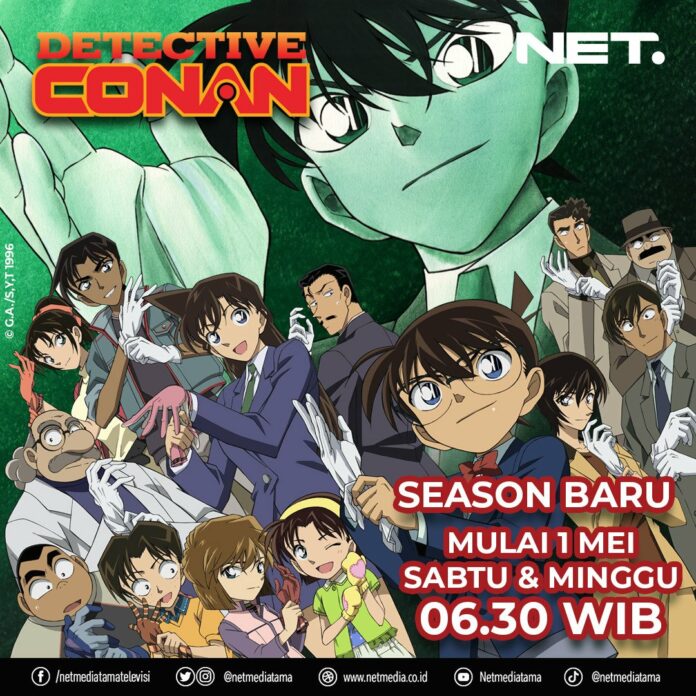 After airing the show since September 2020, Indonesian TV station NET. is adding more episodes of Detective Conan anime series. As announced on the channel’s Twitter account on Thursday (29/4). The newly licensed episodes will begin airing from 1 May 2021 and to be shown on Saturdays and Sundays, at 0630 West Indonesia Time (UTC+7).

Previously, NET. has licensed 20 episodes of Detective Conan anime from episode 516 to episode 535, which have then been rerun since October while waiting for more episodes to be added. According to registration listing at Indonesia’s Censorship Board (LSF), at least 25 additional episodes of the series, episodes 536 to 560, has been registered by the TV station to the board.

Detective Conan, or known in Japanese as Meitantei Conan, is an anime series adapted from the manga by Gosho Aoyama. Detective Conan tells of a high school boy named Shinichi Kudo whose body was shrunk after he was poisoned by a mysterious organization. Disguising himself as an elementary school boy Conan Edogawa, Shinichi must solve various crime cases while investigating the mysterious organization that has shrunk his body.

Detective Conan has been serialized in Weekly Shonen Sunday since 1994 and is still continuing today. In Indonesia, the comic has been published by Elex Media Komputindo and frequently becomes the publisher’s best-selling title. The series has also produced various animated films and live-action drama series. In Indonesia, Detective Conan Anime TV series used to be aired by Indosiar until 2014.