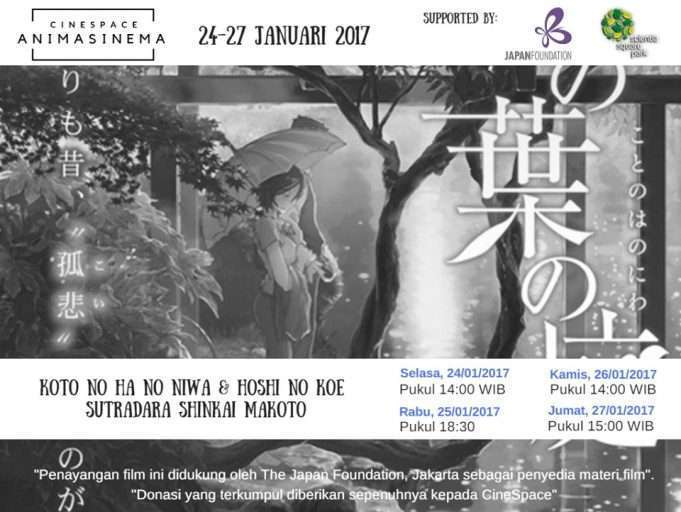 Through the official Facebook fanpage of The Japan Foundation Jakarta, it is announced that The Japan Foundation will collaborate with CineSpace to hold the screening of two Makoto Shinkai’s film. The film that will be screened are Koto no Ha no Niwa (A Garden of Words) and Hoshi no Koe (Voices of a Distant Star). The event itself will be held on January 24-27, 2017.

This screening will be charged donation of Rp 15.000, including coffee or tea as beverages. This film screening is supported by The Japan Foundation Jakarta as the film material provider. All the received donation will be given to CineSpace. Here are the schedule for the film screening of  Koto no Ha no Niwa and Hoshi no Koe at CineSpace:

The screening place is limited for 50 participants only.

Koto no Ha no Niwa (The Garden of Words) is a drama film by Makoto Shinkai that released on 2013. This film told about the meeting of Takao Akizuka, the shoe maker, with Yukari Yukino, 27 years old girl who loves chocolate and beer. One day Yukari realized the school emblem in Takao’s uniform. Not long after that, she left Takao while gave him a poem that made Takao think about the meaning of that poem.

While Hoshi no Koe (Voices of a Distant Star) is a works of Makoto Sinkai that released on 2002. This drama-mecha anime told about Mikako Nagamine, Sumi Sutoh, and Cynthia Martinez who went to space to fought alien named Tarsians. As the member of special troops, Mikako took control of a robot named Tracer as a part of Space Plane Lysenthia. While leaving earth, Mikako connected with her friends through mail, but as the distance get further, Mikako gradually found it hard to communicate with her friends in Earth.