As previously reported, the anime series Eureka Seven will be back in an animated film trilogy titled Koukyoushihen Eureka Seven Hi-Evolution. The project’s official website has revealed that the first film in the trilogy will premiere on 16 September 2017 in Japanese cinemas, followed by the second film in 2018 and the third film in 2019.

Other than Japan, BONES president has mentioned that the Eureka Seven film trilogy will also be screened in several countries, including Indonesia. The plan was to have the film debut outside of Japan as it premieres in Japan.

ODEX Private Limited has confirmed at Friday (6/9) via its Facebook page that it will be responsible in distributing the film to South East Asian countries, including Indonesia. The exact premiere date and whether it will be the same as Japan has yet to be announced. 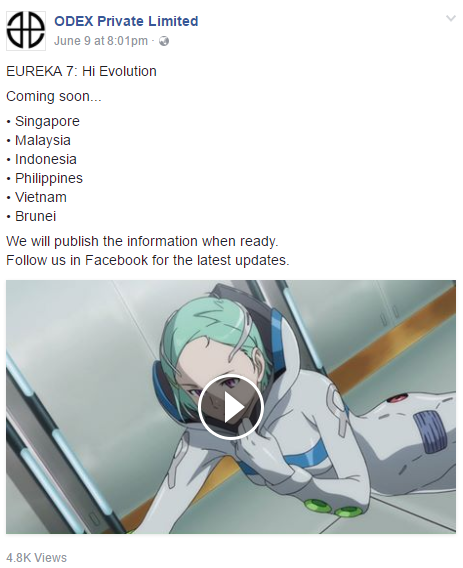 Furthermore, there are new voice actors involved in the  film. Keiji Fujiwara, who voiced the character Holland in the TV series will be replaced by Toshiyuki Morikawa, as the former has taken a hiatus since August 2016 to treat a disease. Meanwhile, Tohru Furuya will voice Adroc Thurston, the father of the main character, Renton.

Produced by Studio BONES in 2005, the original TV series of Eureka Seven tells the story of Renton Thurston who lived uneventful life at Bellforest village. His encounter with a girl pilot named Eureka changed everything, as Renton departed on an adventure with Eureka.

Indonesia Comic Con 2017 is Back Again, Promising a Weekend of...