The star studded cast of Natasha Stronganoff, Can’t Miss Everdeen and James Bean are here to feature in your next Blockbuster Director! Are you ready to make that Movie Masterpiece we’ve been waiting for?

Hollywhoot parodies the greatest characters in Hollywood and you are now in the director’s seat bringing their stories to life. Train new actors into famous Movie Stars with a unique talent development system with over 36 different unique character parodies. Direct movies of all genres from Drama, to Romance and Horror or even set up new series of parody TV shows releasing hit season after season. Finally, win coveted Primetime awards for your achievements and go down in history as Hollywhoot’s greatest director.

Grab your megaphone, direct your cast and follow your destiny to create the ultimate blockbuster!

Joyseed Gametribe is an up and coming mobile game development studio surging amidst the expanding Southeast Asia’s mobile game market. Based in Jakarta, Indonesia, Joyseed’s team is made up of the skilled artists and developers from the region dedicated to planting the seed of joy in the hearts of everyone. Joyseed Gametribe is a studio member of iCandy Interactive Limited.

Stay connected with us:

iCandy Interactive Ltd (ASX:ICI) is an Australian incorporated public company that has its core business in the development and publishing of smartphone games on popular smartphone OS.

iCandy’s run multiple subsidiary games studios in Malaysia, Singapore and Indonesia, including the famed award-winning games studios Appxplore (iCandy) and Inzen Studio. iCandy is one of the leading mobile games companies in Southeast Asia with more than 22 million copies of its games titles downloaded onto smartphones. It focuses on the genre of “mid-core” action-influenced puzzle games.

Almost all of iCandy’s games titles have been featured by either the Appstore or Google Play. It’s recent titles such as Light A Way, Star Tap and Crab War have been named as recommended Best New Games globally. For more info, visit www.icandy.io 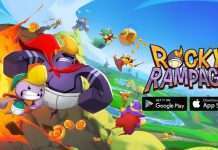 Rocky Rampage: Wreck ‘em Up – The Purple Ball of Destruction is Ready to Roll Out!