In the third season of Sword Art Online, Kirigaya Kazuto or Kirito was asked to become a tester for a new technology of virtual reality world, where he lived with the World’s NPCs in a span of years that’s the equivalent of only several hours in the real world. He also told of his experience in that virtual world to his friends, even though he didn’t have any memory of what he had done there. Actually, Sinon and Asuna were a bit worried with his new job. That anxiety seemed founded when Kirito and Asuna met again with a former member of Laughing Coffin who wanted to take a revenge. For the second time, Kirito was trapped into another problem with the new virtual world, Underworld.

The waiting finally ends with the airing of the first episode of Sword Art Online: Alicization, and this will become a very long story since this anime will air for 4 cours to adap the story from volume 9 to 18 of the novels. Even the first episode runs for 48 minutes, and there are several premiere screening events in some places around the world.

The first half of the first episode of Sword Art Online: Alicization contains the story of the three Rulid Village’s children: Kirito, Eugeo, and Alice. Generally this part explains how the system in Underworld works: taboo index, assigned individual jobs, etc. From here, we can see the closeness of Kirito and Eugeo in doing their jobs cutting trees. Then in the second half, the story returns to the real world, and begins with the action scene of Kirito and friends helping Sinon in the game Gun Gale Online. There is also the conversation between Kirito, Sinon, and Asuna regarding Kirito’s job as the tester of Soul Translator (STL) and the explanation of STL itself.

I think this first episode is good enough as the introduction of the very long Underworld arc. Other than to refresh viewers’ memories regarding SAO II and the Ordinal Scale film, this episode also provides some information of what kind of game that Kirito will face. It may sounds boring, but the detailed animation quality, be it in casual scenes or fighting scenes, make it interesting. I can say that the quality is as good as what have been shown in Ordinal Scale. 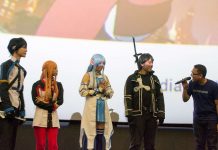 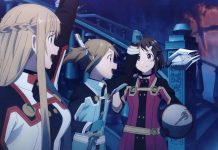 Sword Art Online The Movie: Ordinal Scale Will be Shown in Indonesia