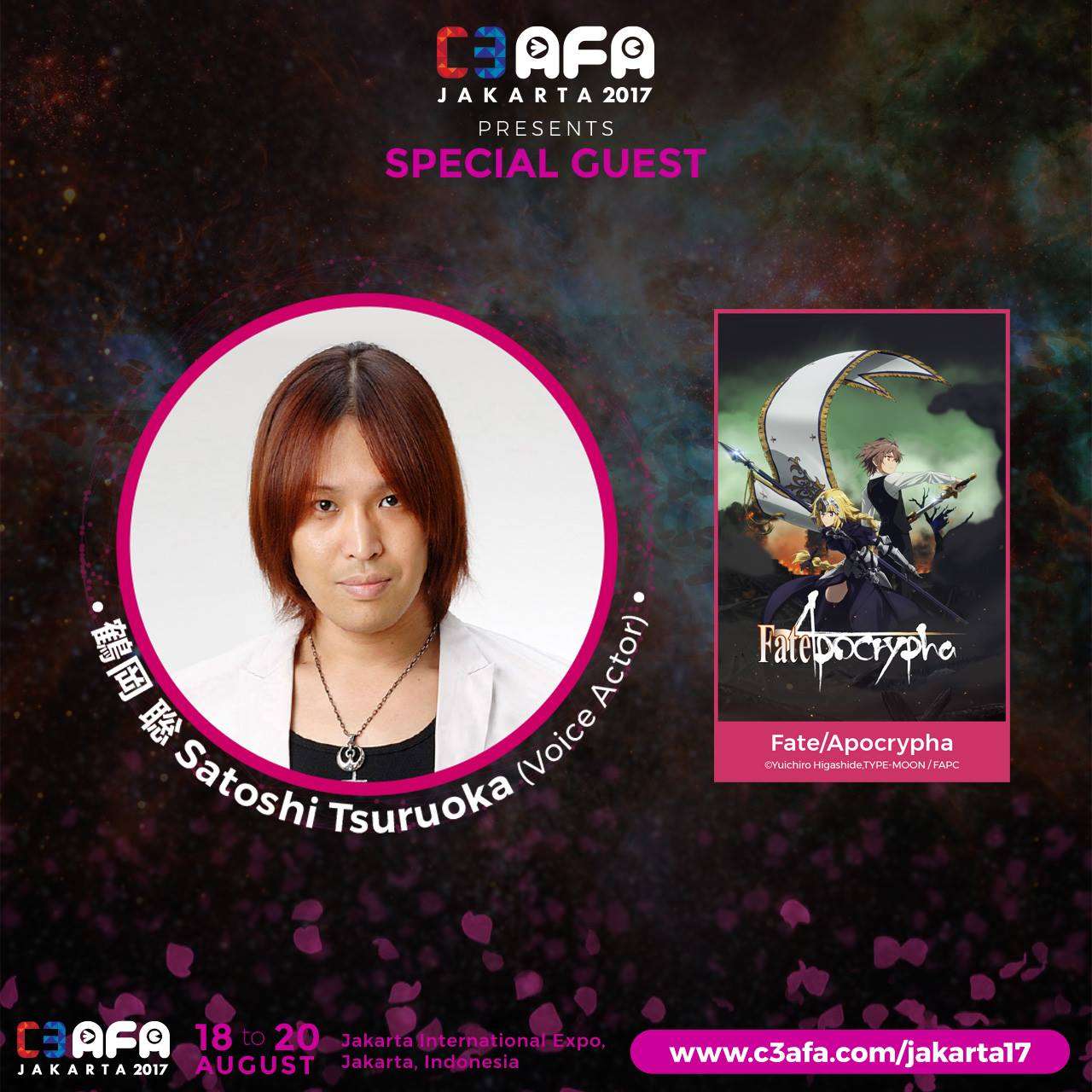 Originating from a visual novel by TYPE-MOON, the Fate series has since expanded across different media, from animated adaptations to prequels to spin-off novels and games. One of the latest entries in this media franchise is the animated adaptation of Fate/Apocrypha spin-off novel, taking place in an alternate timeline where a Great Holy Grail War is fought between two factions of Masters and Servants. Currently airing as one of summer 2017 anime, Fate/Apocrypha was presented as one of the Featured Anime on the second day of C3 AFA Jakarta 2017 event, which took place at JI Expo Kemayoran, Jakarta in 18-20 August 2017.

Aside from showing the first episode of Fate/Apocrypha, the Main Stage session for the show also presented voice actor Satoshi Tsuruoka, who voices the character Berserker of Red/Spartacus in the show, as well as Aniplex producer Shizuka Kurosaki, who is the producer for the show. The two guests take to the stage after the first episode was shown, for a talkshow guided by MC Hiroaki Kato.

After starting with the usual question about the impression of Jakarta, Kato asked producer Kurosaki, who has been to various events around the world, about her impression of AFA. Kurosaki noted that this was the first time Fate/Apocrypha was showcased in an event outside of Japan, and that from her experiences, fans abroad are more expressive than Japanese fans. She was thankful for the enthusiastic responses from the Indonesian audience while watching the first episode that has been shown on the stage, cheering when certain characters like Astolfo appeared, or laughing at the funny moments.

With the large amount of characters being one of the selling points of Fate/Apocrypha, next the opening sequence for the show was shown on the stage, teasing more characters that will appear and fight in the coming episodes. The opening was not included in the first episode, and only started to be used from the second.

After the opening was shown, Kato turned to Tsuruoka, who is not for the first time involved as a voice actor in a Fate title. Previously, he had voiced Caster/Gilles de Rais in Fate/Zero anime and Archer Arash in Fate/Grand Order mobile game. Tsuruoka noted that the most interesting point about Spartacus is how he is always smiling regardless of what he is feeling. The character he likes the most in Apocrypha, though, is Ruler/Jeanne d’Arc, whom his character Gilles de Rais in Fate/Zero adores. Ironically enough, his role as Spartacus in Apocrypha has the character fighting against Jeanne.

Next Kurosaki took the time to take the audience to see part of the process in producing animation. Two key animation test videos were shown, depicting the battle from the beginning of the first episode; one of the Mordred vs. Siegfried fight, and the other of Jeanne vs. Spartacus.

Above: one of the key animation video shown during the stage presentation

Back to Tsuruoka, Kato asked if it was a challenge to voice characters of three different Classes in the franchise. To this, Tsuruoka answered that the differences allow him to perform them differently based on their already strong backgrounds. But he admitted that voicing Arash was the most challenging since little is known about the Iranian hero, especially in Japan. Tsuruoka then demonstrated his skill by live dubbing the characters on stage, including reading one line for Arash in Indonesian.

Kato then read some fan-submitted questions for Tsuruoka and Kurosaki. The first question asked Tsuruoka his tips for voicing villainous characters. Tsuruoka responded that he doesn’t have a tip for voice, but what is needed in playing villains is mental preparation to perform unsettling parts, such as with Spartacus who continues to smile even when he’s sad or enraged.

The second question asked Kurosaki about the motive to adapt Fate/Apocrypha into anime. Kurosaki answered that the novel has some interesting points compared to other Fate titles, notably having fourteen Servants fighting as two opposing teams, as well as being set outside of Japan. She also noted that it has been about ten years since the first Fate/stay night anime was shown, and many animators now involved in making Apocrypha used to watch the first anime when they were younger and even inspired to become an animator because of it.

The last question asked Tsuruoka about how he feels when he saw the characters he performed. Here, Tsuruoka explained that during the dubbing process, voice actors usually performed more than one take for a scene. Thus, it always feels interesting to him to find out which take ends up being used whenever he sees the finished product shown on air.

Before the session was finished, a surprise party was thrown to celebrate Tsuruoka’s birthday, which takes place on 19 August. Though it feels weird to celebrate it outside of Japan, Tsuruoka was thankful that he was able to celebrate his burthday on stage with fans, and he was also thankful for the enthusiasm of the audience when he was dubbing the characters on stage. He also revealed that he had recently finished his take for the first episode of a new Fate series. As for Kurosaki, she parted by saying that she is committed to deliver more Fate series with fresh approaches.

Fate/Apocrypha will be airing outside of Japan, including Indonesia, on Netflix starting from 2 December 2017.