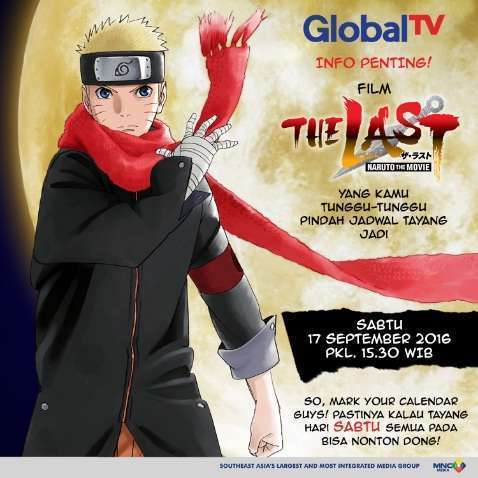 Although there are rumor about this movie to be aired on 30 June 2016 ago, Global TV official’s has just release the official schedule for this movie. The Last: Naruto the Movie will air on Saturday, 17 September 2016 at 15.30 o’clock local West Indonesian Time.

The Last: Naruto Movie is the 10th movie of the Naruto series. This movie itself has been released in Japan on 6 Desember 2014 ago and for in Indonesia they has been released on 2015 at CGV Blitz, Cinemaxx, and Platinum Cineplex.

Adapted from a comic with the same title made by Masashi Kishimoto, this comic’s published by Shounen Jump on 1999 for the first time. Written by a story of a pilot with the same title by Kishimoto on 1997 through Akamaru Jump Magazine, this comic tells the story about a ninja name Naruto Uzumaki who dream to become a hokage (name for his village leader). And the comic has reach a huge success in and outside of Japan. The success of the comic then adapted to anime on 2002 and still airing until now.

In Indonesia, the comic had been published by Elex Media Computindo with the total of 66 chapters so far. The anime series once been aired on television in Indonesia on TRANS TV, Indosiar, and Global TV and and had raised the name of Hana Bahagiana as Naruto’s seiyuu. But the person who had been voicing as Naruto are not only one, before Hana the person who had taken the role are Ridawati and Mirna Haryati. The anime also had been aired on paid television Animax. In Japan, this anime is made by Pierrot Studio and aired on TV Tokyo.

And the seiyuu who participate on the movie are Hana Bahagiana as Naruto, Bima Sakti as Choji, Mohammad Romli as Sasuke & Kakashi, Hardi as Sai, Gaara, and Lee, Hari Suseno, Wan Leony Mutiarza as Hinata, Agus Nurhasan as Shikamaru, and Tuti Pinkan as Sakura. Also featuring special performance from Vika Aulia and Yeni Ariati. With Fuwad Al Quwat as directional dialogue, Dian Roos and Vika Aulia as translator, Awi Ejap as mixing editor, and Darkim Darkim as dubbing coordinator.

Also read The Last: Naruto The Movie review by KAORI (In Bahasa) in this link. 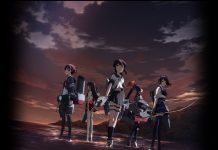